The Watson Case: An “Impossible” Surgery Makes a Night-and-Day Difference for a Patient with Proteus Syndrome

By the time 39-year-old Ricky Watson saw Amber U. Luong, MD, PhD, he could no longer swallow, eat or talk. His only avenue of communication with his family was writing on a notepad or texting via cell phone.  Diagnosed at the age of 10 with Proteus syndrome, an extremely rare condition marked by overgrowth of bones, skin and other tissues, Watson had undergone numerous surgeries at institutions in East and West Texas in failed attempts to correct conditions caused by the syndrome.

“When Ricky was born, I knew something was wrong,” says Judy Watson, his mother. “I already loved him even before they handed him to me, but I noticed that his head was misshapen and his eyes were a little crossed. The doctors assured me that he was okay, just not the prettiest baby, and that these things are common in babies and improve over time.”  In cases of Proteus syndrome – only a few hundred have been reported in the world – organs and tissues grow out of proportion to the rest of the body. The overgrowth is usually asymmetric and can be disfiguring, as in the case of Joseph Merrick, a 19th-century Englishman who became known as the Elephant Man. The syndrome takes its name from Proteus, in Greek mythology, the prophetic old man of the sea who could change his shape at will.

As a child, Watson experienced developmental delays. The youngest of his parents’ three biological children, he was weaker than the others and late in meeting his developmental milestones.  “I took pictures of Ricky when he was a baby so his doctors could see how he’d changed over time,” Mrs. Watson says. “When he was about seven months old, I noticed that two of his toes on the left foot grew bigger than the others. Eventually his eyes corrected but his forehead was larger on one side than the other, and his right eye was larger than his left eye. When he was 22 months old, his doctors thought he had a brain tumor because one ventricle was larger than the other. They removed some tissue for a biopsy but the pathologist was stumped because he couldn’t identify it.”

In his early 30s he started developing nasal polyps and underwent three polypectomies. “We were driving back from Dallas one day and discovered a new polyp that continued to grow in his sinus,” Mrs. Watson says. “Our ENT in Longview trimmed it back as far as he could in three surgeries, each about a year apart. Ricky had always been able to swallow the biggest pill you could give him, and then all of a sudden he couldn’t take a little ibuprofen without it sticking in his throat. Then he worsened to the point that he couldn’t eat regular food and had to use a G-tube. He lost weight and grew weaker. Eventually, we couldn’t understand him when he talked. It was like he was wasting away.” 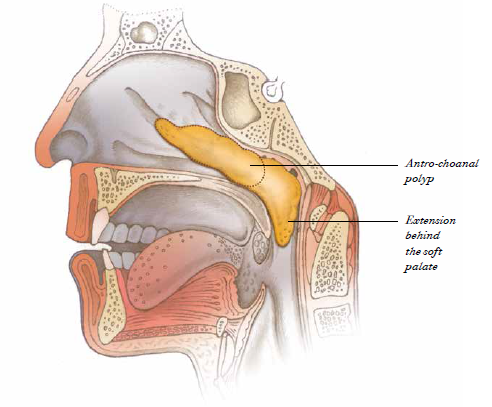 Large polyps can extend through the back of the nose and rest against the soft palate, causing symptoms of nasal obstruction and difficulty swallowing.

In November 2014, Watson’s neurologist in Longview, Texas, referred him to Dr. Luong in the Department of Otorhinolaryngology-Head and Neck Surgery at UTHealth Medical School. “He’d been seen by so many doctors and had undergone three polypectomies but no one would attempt to remove the large polyp that had grown from his sinus down the back of his mouth,” says Dr. Luong, an associate professor and director of research in the department, who also directs a laboratory at the Brown Foundation Institute of Molecular Medicine for the Prevention of Human Diseases. “His left paranasal sinuses were completely blocked and a six-inch-long polyp was obstructing his airway and esophagus inlet. Sinus pressure was triggering debilitating migraines that forced him to stay in the dark of his closet. Unable to communicate except through writing, he was losing contact with his family. We believed we could help him.”

Mrs. Watson recalls her first meeting with Dr. Luong. “We were so thrilled with her nature,” she says. “She was compassionate, professional and respectful. When she said she could help Ricky, our whole family was thankful.”

With Watson’s dramatically abnormal asymmetry, the first challenge was getting a good CT scan of his sinuses. “The outside imaging his family brought in would be of no use in the OR because he’d been scanned as if his anatomy were normal,” says Elliott Friedman, MD, a clinical assistant professor in the department of Diagnostic and Interventional Imaging at UTHealth Medical School. “Ricky has extensive asymmetrical bone overgrowth involving the skull base. His right frontal sinus is large, and on the left side there is almost no frontal sinus, so positioning him for the scan was a challenge.”

The positioning hurdle was overcome through the skill and diligence of CT technologist David Huff. “He worked hard to get Ricky in the right position and was so patient and kind while he was doing it,” Mrs. Watson says. “The rest of the staff was going home. He was the only one left there but he didn’t act rushed. We appreciated that so much.”

CT images of Watson were acquired in a volumetric fashion, allowing for manipulation after acquisition. “By adjusting images of the transverse, sagittal and coronal planes, we can manipulate the data so that what the surgeon looks at on the scan is very close to what she is accustomed to seeing in the OR,” Dr. Friedman says. “Dr. Luong wanted to know what to expect during surgery. Our goal was to make a difference for the patient by giving her the information she needed.”

The second challenge came in the OR. “Our surgical navigation system requires an external emitter placed at the side of the head,” Dr. Luong says. “Patients are normally lying flat during surgery. We had to do some artful positioning to use the navigation system – and we absolutely needed it because of Ricky’s anatomy.”

When Watson came out of post-anesthesia after the three-and-a-half-hour surgery, he could talk immediately. “I was really happy with Dr. Luong,” he says. “She was so sweet the whole time. I was in terrible shape and couldn’t breathe. I had to sit up to sleep. I prayed for someone to help me because I was scared. I was thankful the Lord found someone for me, and I appreciate her so much.”
Mrs. Watson says the difference in her son’s quality of life is like night and day. “We’re happy to have the son we love back,” she says. “From his admission to his discharge, everyone we met along the way was professional, compassionate and just plain sweet to us – we never felt like we were cows coming through the chute. We felt confident that Ricky was in the very best hands.”

Ronnie Watson, Ricky’s father, describes the surgery as a “wonderful accomplishment. We are so thankful to God for Dr. Luong’s willingness to do it,” he says. “She certainly has a caring heart for people, and that’s what makes her special. God bless her.”