With a Bone-anchored Hearing Aid, One Good Ear Helps the Other

In early June 2014, Steve Blatt was riding his motorcycle to work along the same route he’d used for nearly 40 years.  It was raining, and when his front tire hit an uneven spot in the road, his bike slid out from under him.  He did two somersaults through the air and lost his helmet.  When he hit the ground, he suffered a transverse fracture through his right temporal bone – the hardest bone in the body – a complex structure that houses the cochlear and vestibular end organs, the facial nerve, the carotid artery and the jugular vein.  Blatt was rushed to the Level I Texas Trauma Institute at Memorial Hermann-Texas Medical Center as a full code with a traumatic brain injury, mandibular fracture and three broken ribs.  After being stabilized by the trauma team, he was admitted to the otorhinolaryngology service under the care of Ibrahim “Trey” Alava, MD.

“Steve couldn’t hear out of his right ear and reported dizziness with a sensation of spinning,” says Dr. Alava, an assistant professor in the Department of Otorhinolaryngology-Head and Neck Surgery at UTHealth Medical School.  “A portion of the right mandible under the temporal bone had been fractured, and he was bleeding from his right ear.”   Two days later, Blatt, still hospitalized, developed facial nerve paralysis as a result of swelling in the nerve canal. Dr. Alava prescribed steroids to treat the paralysis, which resolved over time.   After a five-day hospitalization, Blatt continued in follow-up with Dr. Alava for head and ear trauma. A few weeks later, the otolaryngologist referred his patient to UTHealth Audiology, where Allison Boggess, Au.D., performed a comprehensive hearing assessment and evaluation using videonystagmography.

“We knew that conventional hearing aids wouldn’t help his deficit,” Dr. Alava says. “Instead, we recommended a bone-anchored hearing aid (BAHA) to route the sound from his non-hearing right ear to his good left ear.”  BAHAs use the skull’s ability to transmit sound to the ear with good hearing.  The surgeon implants the bone-anchored implant, which picks up sounds through an external, magnetically attached microphone/processor that converts the sound into vibrations. The vibrations are transmitted through the skin to the skull as recognizable sounds. 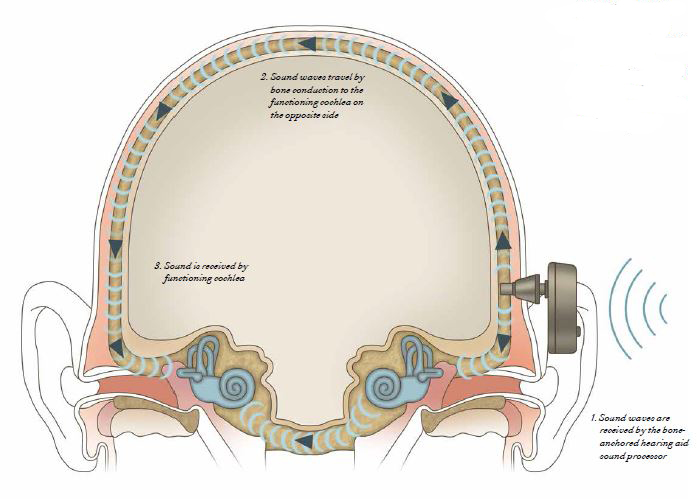 Bone-anchored hearing aids transfer sound from the patient’s poorly functioning ear to the opposite ear with good hearing. The device transforms sound energy to vibrations transmitted through the skull to the normal cochlea in the hearing ear.

In an uncomplicated day surgery, Dr. Alava made an incision behind Blatt’s non-hearing ear, drilled two wells to allow the implant to rest flush to the skull and screwed in the magnetized implant before closing the incision. “The microphone has a magnetic base plate that allows it to attach to the implant and be removed,” he says. “Steve wears the microphone on the outside and as it vibrates the skull, he can perceive sounds that come from the right through his left ear,” Dr. Alava says.

To compensate for his spatial hearing loss, Blatt underwent vestibular rehabilitation at TIRR Memorial Hermann Outpatient Rehabilitation at the Kirby Glen Center, where therapists developed a comprehensive plan to reduce his symptoms and improve his balance.  During an intensive, custom-designed four-month program, he regained much of the physical function he had lost, and continues his recovery.   “It takes a while to get used to the magnet and microphone,” Blatt says.  “The microphone looks like a Bluetooth headset attached to the scalp behind my right ear. It has a volume control, and the magnet has five or six different strengths that have to be adjusted regularly.  I go in to see the audiologist, she connects it to a computer and tweaks the programming or installs an upgrade.”

Dr. Alava is still seeing Blatt in follow-up for balance issues.  “Even though a patient may lose his vestibular function on one side, there is a compensation mechanism because of the brain’s plasticity. They learn to compensate for the loss over time,” he says.

Blatt considers himself lucky to be alive. “I’ve always been an advocate for helmets and motorcycle safety,” he says. “The accident itself and losing my helmet was one of those one in a million things. Allie is a great audiologist, and Trey is a great doctor. I see her regularly, and he’s always available by text when I have a question.  The hearing aid has given me something like 10 to 15 percent hearing in my right ear.  That’s a whole lot better than zero.”