Beyond Septoplasty and Turbinate Reduction: Correction of Nasal Valve Stenosis Adds Synergy to the Mix 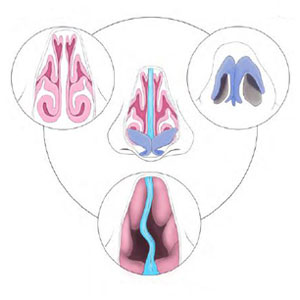 It’s not uncommon for patients to continue to have breathing problems after undergoing various procedures for obstructive sleep apnea and snoring. Among those who failed to find relief from prior surgeries, including maxillomandibular advancement (MMA), is 56-year-old Rick Smith, who underwent nasal reconstruction involving repair of a deviated septum, turbinate reduction and correction of nasal valve stenosis at Memorial Hermann-Texas Medical Center.

His surgeon was Tang Ho, MD , MSc, FACS, chief of facial plastic and reconstructive surgery in the Department of Otorhinolaryngology-Head and Neck Surgery at McGovern Medical School at UTHealth. “When we combine surgery for deviated septum and large turbinates with correction of nasal valve stenosis, there’s a synergistic effect in improvement of breathing,” says Dr. Ho, an assistant professor in the Department.

“Published studies have supported this, and in my practice I’ve found that if septoplasty and turbinate reduction provide a patient with, for example, three times the improvement, and if correction of nasal valve stenosis provides five times the improvement, the three procedures combined can produce a synergistic effect far greater than the additive benefits of these individual procedures.”
After Smith moved to Houston in 1985, an annual fall visit to an ENT and a prescription for antibiotics to treat sinus infection was a given. “Then I got married in 2002, late in life, and my wife told me I snore. I had balloon sinuplasty and then the MMA surgery, but I still had sinus problems. If I lay on my side while sleeping, my sinuses would clog up and I couldn’t breathe.”

The reconstructive surgery Dr. Ho performed on Smith the day before Thanksgiving 2015 accounts for nearly half of his practice. “This is a condition we see frequently in our practice,” he says. “The inability to breathe through the nose often goes beyond the obvious deviated septum and large turbinates to nasal valve stenosis, which is a more dynamic issue and varies depending on how forcefully you inhale. When I describe the surgery to patients, I tell them that it’s essentially a cartilage repositioning procedure. We give the nose additional support, almost like an internal Breathe Right® strip that permanently opens the nasal airway.”

Smith, who was prepared for swelling and a painful recovery, was pleasantly surprised. “It was basically a forgettable surgery and a very fast recovery,” he says. “I had zero pain and no complications. I still have allergies so I know I’m never going to be perfect, but I can breathe freely now.”