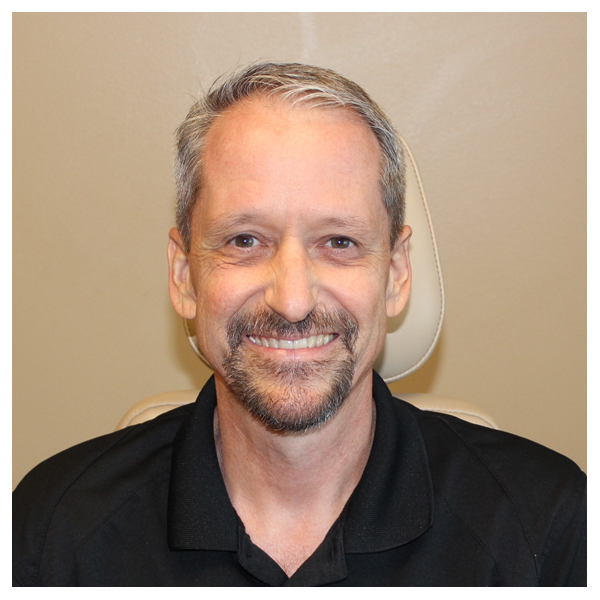 Often it’s the little things that give a patient the courage to carry on with a tough treatment. Spike Sturdivant found the medical and moral support he needed in otorhinolaryngologist Amber Luong, MD, PhD, and radiation oncologist Angel Blanco, MD, after being diagnosed with nasopharyngeal carcinoma in early 2018. Sturdivant, who lives in southeast Texas near the coast, had struggled with sinus problems since 2015. His ENT in Beaumont referred him to Dr. Luong for evaluation.

In November 2017, he felt pain and numbness on the right side of his face and head that progressively worsened. In early January 2018, he made a trip to Houston to see Dr. Luong, who found large polyps on endoscopic exam.

“As ENTs we recognize nasal polyps as a benign but annoying condition,” says Dr. Luong, an associate professor and director of research in the Department of Otorhinolaryngology-Head and Neck Surgery at McGovern Medical School at UTHealth. “But Mr. Sturdivant’s symptoms suggested something else, so we set a surgery date to get a tissue diagnosis.”

Dr. Luong removed the obstructing polyps and then was able to visualize a large tumor in the patient’s nasopharynx. She performed a biopsy that was later interpreted as nasopharyngeal carcinoma (NPC).  Despite advances in cancer treatment, NPC remains a devastating diagnosis.

“I knew the radiation and chemotherapy would be harsh,” Sturdivant says. “There would be a lot of damage to the mouth and sinus area. There was a possibility of hearing or eyesight loss. But I had confidence in the skills of Dr. Luong and Dr. Blanco.”

As a result of radiation, fibrous scar tissue built up in Sturdivant’s sinuses. “Dr. Luong saw me once a week to clear out as much of the tissue as she could before it hardened,” he says. “Sometimes I could breathe normally for a few hours or a day afterward, and it was such a godsend. That she was willing to see me once a week in her office and perform this procedure meant so much to me. God gave her the ability, skill, attitude, and discernment to care for me. Eventually I graduated to every two weeks, then every three weeks, then once a month. I felt that she went above and beyond for me, and I don’t know that every ENT would have done that.”

Sturdivant’s radiation therapy ended in early June 2018. The frequent clinic visits and repeated debridement kept his nasal passages open despite the high dose of radiation required to treat the cancer – a huge win for his quality of life.

“The first week of October 2018, I went for PET and MRI scans and met with Dr. Blanco to hear the results,” Sturdivant says. “They showed that my sinus area was clear of any tumor. Early on, Dr. Blanco told me, ‘This is a beast and it will be difficult to get rid of it.’ I could tell by the look in his eyes that he meant it and that this was very serious. I really appreciate the fact that he didn’t take the usual approach with me – it’s stage so-and-so and this is your chance of survival. It was not fun, but I’m done with it. I have nothing but great things to say about all the doctors who gave me care.”

“It’s the little things that help patients get through the big things,” Dr. Luong says. “When you have empathy for a patient, it creates a bond. It’s easy to get so wrapped up in curing the cancer that we forget how miserable treatment can be for the patient. They’re scared, and sometimes it’s just a matter of putting it in terms we would like to hear if we were on the other side, like Dr. Blanco calling NPC ‘a beast.’ Medical terminology can create a wall. As physicians we have to find the middle ground. We have to maintain enough distance to make good decisions and give patients the hard facts, but we also have to remember our humanity.”