From Neonate to Toddler: Handling a Complex Case Over 3 Years 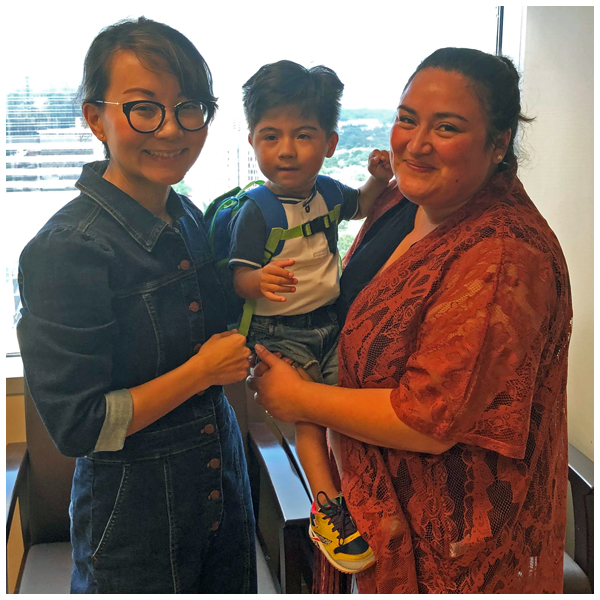 Zhen “Jane” Huang, MD, MBA, first met Ricardo “J.J.” Castaneda in the neonatal intensive care unit (NICU) at Children’s Memorial Hermann Hospital in 2017, when he was 4 months old. Born prematurely at 32 weeks, he had a heart defect called patent ductus arteriosus, as well as an omphalocele that left his intestines outside his body.
After pediatric cardiology and pediatric surgery repaired these conditions, Dr. Huang was consulted to help wean Ricardo off the ventilator. He had tracheomalacia, a collapse in the cartilage that normally keeps the airway open. She performed a tracheostomy in February 2017.

“Ricardo spent nine months in the NICU because of this and other comorbidities,” says Dr. Huang, an assistant professor in the Department of Otorhinolaryngology-Head and Neck Surgery at McGovern Medical School at UTHealth. “We see our chronic tracheostomy patients every six months after discharge, and every year we do an airway assessment through direct laryngoscopy/bronchoscopy. These are the steps we take to move these kids toward trach removal. We go very slowly, working closely with our pulmonary colleagues.”

With the tracheostomy, Dr. Huang placed a PassyMuir® speaking valve to allow Ricardo to voice around the trach tube, but he had a hard time tolerating it. In February 2018, she took him back to into surgery to remove inflamed tissue that had formed above the trach.

“By then, the tracheomalacia we’d seen when he was an infant had pretty much resolved,” she says. “All these were reassuring signs that we could work toward removing the tracheostomy. When I saw him in August 2018, we decided to start working toward decannulation (removal). In October, he completed a sleep study that showed mild obstructive sleep apnea and examined the airway again.”

A sleep endoscopy revealed a collapse in the tonsils and adenoids, which Dr. Huang removed at the same time she did a repeat airway assessment to ensure safe tracheostomy removal. She and her team removed the trach in October 2018.

“Ricardo developed a tracheocutaneous fistula, and in June 2019, we performed a fistula closure,” she says. “The following July we did a revision closure, and by August, after minor complications, he looked really good. By November it had healed up completely, and he was active and talking a lot. It was amazing to see him come all this way and very rewarding to see him go from a tiny baby in the NICU to a normal toddler. The entire process took 2 1/2 years, which is not uncommon.

“The Castaneda family was very motivated to help Ricardo through it,” Dr. Huang says. “His mom managed his complex care well. She was very attentive to his needs and development. When I saw them last, they were enrolling him in school. She was a joy to work with, and I’m actually kind of sad I don’t have a reason to see them any longer.”

Ricardo’s mother, Gabriela Castaneda, says that although the experience was overwhelming at times, she always felt well- informed about the best ways to help her son. “I never lost faith in Dr. Huang,” she says. “We saw each other a couple of times almost every month, and she was there pre-op and post-op, and even during surgery we knew what was happening. After all that, Ricardo is an active, playful 3-year-old – sometimes too active. If we have issues when he gets older, we’ll contact Dr. Huang, but as of now we’re officially discharged.”