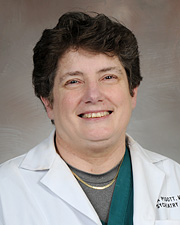 Teresa Pigott, MD, is a professor in the Department of Psychiatry and Behavioral Sciences, as well as director of Psychopharmacology at UTHealth Harris County Psychiatric Center (HCPC). She is currently an attending psychiatrist on the hospital’s Bipolar Disorder Unit. An accomplished clinician-researcher, she has published over a 100 abstracts and 75 articles in peer-reviewed professional journals as well as 20 book chapters. She has also served as the Principal Investigator on more than 85 clinical trials.

Pigott’s favorite role is being a teacher and mentor to residents and medical students. Since joining the department in 2011, she has received the Dean’s Teaching Excellence Award from the McGovern Medical School each year and has been recognized four times as the ‘Outstanding Teacher’ by the 2nd Year Psychiatry Residents. In addition to leading didactics as part of the Psychopharmacology Seminar Series for the residents, she also supervises second year residents and medical students on her unit. To facilitate opportunities for residents to participate in research at UTHealth HCPC, Pigott and Melissa Allen, DO, developed a clinical data base derived from administering various standardized rating scales to patients admitted to the Bipolar Unit. This project has served as the basis for more than 20 of our psychiatry residents to present over 30 research posters at various national meetings in the recent years.

Pigott received her medical degree from Northeastern Ohio Universities College of Medicine and completed psychiatry residency training at The Medical University of South Carolina. She also did a research fellowship in Psychopharmacology at National Institute of Mental Health. Prior to joining UTHealth, Pigott was with the University of Florida College of Medicine for over ten years.