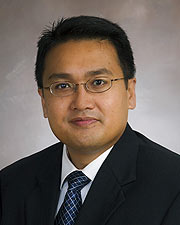 Since 1999, Dr. Estrera has played a pivotal role in the founding and establishment of the department.  After 20 years of dedication to the department’s success and growth, Dr. Estrera’s new leadership role will focus on overseeing the continued commitment to research, education, and medical care to the Houston community; an ongoing effort to ensure innovation, scientific discovery, quality, and excellence in patient care for the department.

Dr. Estrera received his medical degree from the University of Texas Southwestern Medical School in Dallas, followed by residency and fellowship training in general surgery and cardiothoracic surgery  at Baylor College of Medicine.  Dr. Estrera specializes in diseases of the aorta, specifically focused on thoracoabdominal aortic aneurysms and aortic dissection.  He has coauthored more than 260 peer-reviewed articles and nearly 70 chapters.  His studies have led to refinements in surgical techniques for the treatment of thoracic aortic aneurysms and aortic dissection.  He has presented more than 200 lectures and workshops worldwide, which have influenced the international standard of cardiothoracic surgery training.

In his new role, Dr. Estrera will work closely with the leadership teams at The University of Texas System, McGovern Medical School, UTHealth, Memorial Hermann Health System, and Harris Health System.  He will aid in the communications and cross-collaboration with these academic and healthcare organizations to design and align the vision and strategy of entity’s overarching mission.

On behalf of the department’s faculty and staff, we would like to congratulate Dr. Estrera on his new role, and we look forward to what the future holds in store for the department.