Sialendoscopy: An Innovative Minimally Invasive Approach to the Treatment of Sialolithiasis

When Vida Smith Compton first saw otorhinolaryngologist Sancak Yuksel, M.D., in late summer 2013, she had pain and swelling beneath the ventral surface of her tongue on the right side, and in her neck under the mandible.

“I looked like I had the mumps under my right jaw, and I could hardly swallow,” says the 67-year-old Wharton, Texas, resident, who has a history of blocked salivary gland ducts going back to her teenage years. “Years ago, my ENT showed me how to manipulate the glands to release trapped saliva. But this time I was sore from my right ear all the way down to the middle of my chin, and it was too painful to touch.”

A CT scan revealed three large sialoliths – calcified masses also known as salivary stones – in the submandibular gland, the most common location. Sialoliths are found less commonly in the parotid gland, and rarely in the sublingual gland or minor salivary glands.

“We suspect sialolithiasis if swelling occurs when salivary flow is stimulated by the sight, smell or taste of food,” says Dr. Yuksel, an assistant professor in the department of Otorhinolaryngology—Head and Neck Surgery at UTHealth Medical School. “If we’re lucky, we can see the swollen gland or locate the stones by palpating around the orifice of the gland duct or in the floor of the mouth. Otherwise, we rely on a CT scan to reveal density in the gland.”

The traditional method of treating sialolithiasis unresponsive to conservative management has been surgical excision of either the stone or the involved gland. Compton, however, was the beneficiary of a relatively new procedure called sialendoscopy. Used both diagnostically and therapeutically, sialendoscopy is a technically challenging procedure that allows endoscopic visualization of the gland and nonsurgical removal of stones small enough to fit through the duct, usually 5 millimeters or less in diameter.

Dr. Yuksel took Compton to the OR in October 2013. Using a very fine 1.1-millimeter endoscope equipped with a wire basket, he visualized the three stones, which ranged in size from 8 to 12 millimeters in diameter. “The stones were situated back to back like train cars and were so large that they were beyond the grasp of the basket,” he says. “I was able to maneuver the endoscope behind the farthest stone and use the basket to pull all three stones to the orifice of the duct.” 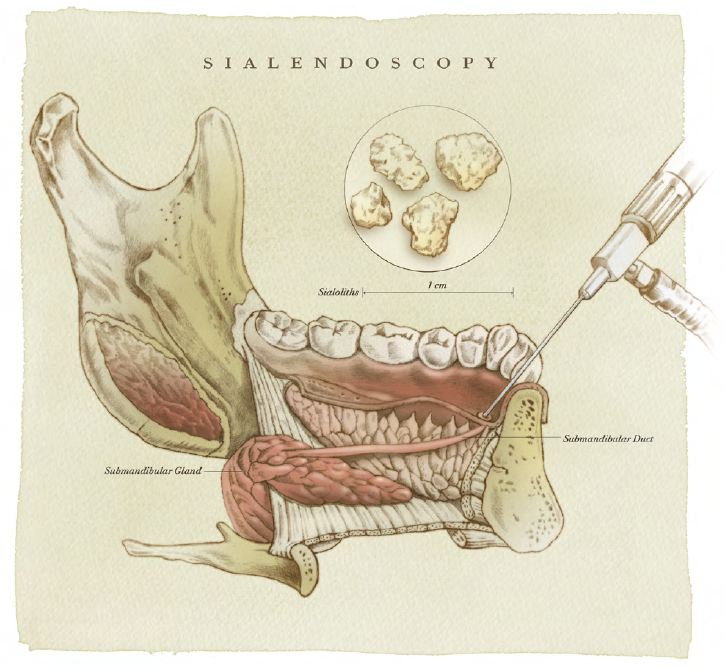 After making a tiny nick in the orifice, Dr. Yuksel removed all three sialoliths successfully. He re-scoped to check for smaller stones, cleaned the entire duct system of debris and sutured a tiny piece of plastic tubing in place as a stent to hold the orifice open. “The beauty of sialendoscopy is being able to provide patients relief with no external scar, no nerve damage and a lower risk of surgery-related complications,” he says.
Compton, who healed quickly, believes her salivary stones may have been caused by dehydration. Other causes may include abnormalities in calcium metabolism, reduced salivary flow rate, altered acidity of saliva caused by oropharyngeal infections and receiving radioactive iodine.

“I think Dr. Yuksel was shocked when he saw how big my stones were,” says Compton, who says that bad situations bring out her sense of humor. “Personally, I think he’s a really, really good doctor and a very thorough surgeon. I feel truly blessed to have been referred to him for a problem that came up in a matter of days. After the surgery, I told him I wanted the stones back so I could make a necklace. They’re mine, after all. I made them.”