Sujana S. Chandrasekhar, MD, FACS, FAAO-HNS, president-elect of the American Academy of Otolaryngology-Head and Neck Surgery (AAO-HNS), was the guest speaker at 2015 Otorhinolaryngology Frontiers, which highlighted research endeavors and emerging technology in the diagnosis and management of common otolaryngologic clinical problems.  More than 70 physicians and other healthcare professionals attended the event, which was  held on June 27, 2015, at the Brown Foundation Institute of Molecular Medicine at The University of Texas Health Science Center at Houston, and sponsored by the Department of Otorhinolaryngology-Head and Neck Surgery at UTHealth Medical School.

Dr. Chandrasekhar is the third woman and the first person of Indian descent to hold the office of president-elect of the 12,000-member organization.  Previously she served as chair of the AAO-HMS Board of Governors. 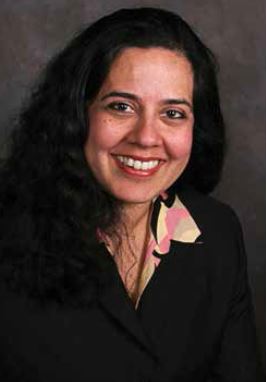 Dr. Chandrasekhar attended medical school at Mount Sinai School of Medicine in New York City, graduated at the age of 22 and completed her residency in otolaryngology-head and neck surgery at New York University Medical Center in New York.  She completed her fellowship in otology and neurotology at the House Ear Clinic and Institute in Los Angeles California.  She served on the full-time academic faculty of both UMDNJ-New Jersey Medical School and Mount Sinai School of Medicine before entering private practice in New York City in 2004.   She is currently director of New York Otology, director of neurotology at the James J. Peters Veterans Administration Medical Center, otologist/neurotologist at the New York Head and Neck Institute and voluntary faculty at Mount Sinai.  As such, she is at the clinical forefront in management of disorders of hearing, balance, tinnitus, facial nerve and lateral skull base, as well as cochlear and BAHA implants.   She is the medical director of the Vestibular Disorders Evaluation Clinic at the Bronx VA Hospital, a multidisciplinary team created to rapidly and thoroughly assess and treat patients with complex dizziness disorders, especially those returning from active duty. She is currently building the Comprehensive Balance Center at Lenox Hill Hospital/Manhattan Eye Ear and Throat Hospital.

The following presentations were made at ORL Frontiers by the department’s faculty and residents:

ORL Frontiers is an annual CME event highlighting the research productivity of members of the Department.