A good surgeon’s eye, ultrasound performed in the office and OR, and the availability of an experienced multidisciplinary team turned life around for Mary Fitts, whose past had been a series of doctor visits and undiagnosed ailments dating back to the late 1990s. Early in the 2000s, she had a total thyroidectomy. Sometime later, she developed symptoms of hypercalcemia linked to hyperparathyroidism, but physicians at multiple institutions were unable to localize a parathyroid adenoma obscured by postoperative scarring. They deferred surgery, and her symptoms continued to worsen.

“I developed severe brain fog and confusion,” says Fitts, 68, who is retired from NASA in Clear Lake, Texas. “My performance on the job suffered. People would ask me questions, and I would be blank. My bones hurt deep inside, and there were days when I was so tired and in so much pain that I could barely get up the stairs to bed. I had a fair degree of depression because I didn’t know what the problem was. After nearly 15 years of seeing doctors, I thought I’d run out of luck.”

After recognizing the complexity of her case, an ENT in Clear Lake referred her to Ron Karni, MD, an assistant professor in the Department of Otorhinolaryngology-Head and Neck Surgery at UTHealth Medical School.

“Like many people with high calcium levels, Mary had a little bit of this and that – problems that can vary from mental confusion and depression, to general aches and pains with no obvious cause, to recurrent kidney stones,” Dr. Karni says. “She had the classic symptoms for parathyroid tumor, but the challenge is always how reliably we can localize the tumor before surgery. None of the previous studies she’d had at other institutions could determine with great certainty where the adenoma was. Because she’d had thyroid surgery years earlier, we knew we’d be working in a field of scar with high risk for damage to the larynx and other structures. This was a high-stakes case, and accuracy in pinpointing the adenoma was essential to success.”

Fitts listened while Dr. Karni reviewed her previous imaging studies and notes from other physicians. She concluded that she had found the right physician – since Dr. Karni focuses his practice on thyroid, parathyroid and head and neck oncologic surgery and also has certification in head and neck ultrasonography. He routinely uses ultrasound in cases of hyperparathyroidism to localize the parathyroid adenoma and facilitate minimally invasive surgery.

In Fitts’ case, Dr. Karni localized the tumor with office ultrasonography and then went a step further, using fine-needle aspiration and measurement of parathyroid hormone (PTH) in the aspirate as a preoperative localization procedure to confirm that the ultrasound finding was actually the adenoma. A pathologist reviewed the aspirate and confirmed that the specimen was parathyroid adenoma. 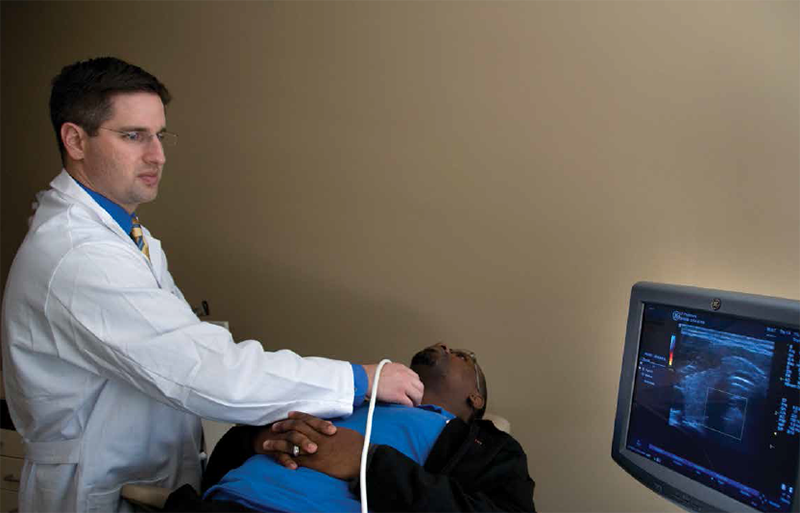 “That got us over hurdle number one – finding a tiny tumor in a field of scar,” Dr. Karni says. “Hurdle number two was taking her to the OR and excising the adenoma. We’ve observed that when parathyroid tumors are identified on ultrasound before surgery, the surgery is successful in nearly all cases and can be performed through a small incision. It’s like getting good intelligence before going into battle. Using ultrasound during the operation gives us X-marks-the-spot accuracy. Once we’ve located the tumor, the surgery itself is uncomplicated because we’re removing a gland located only a centimeter or two under the skin.”

When the surgical team checked Fitts’ PTH levels in the OR, they had dropped to normal, confirming that the tumor had been removed. The pathology report confirmed benign parathyroid adenoma.

“In head and neck surgery, the degree of detail can make the difference between success and failure,” Dr. Karni says. “Ultrasound is very easy for surgeons to perform because we know the anatomy, and because of our experience in dealing with anatomy during surgery, our view of the ultrasound study is different than a radiologist’s. That’s the beauty of surgeon-performed ultrasound – we know with near 100 percent certainty where the tumor is before we open in surgery.”

From Fitts’ prospective, the surgery was a piece of cake. “I recovered quickly and my debilitating pain is gone,” she says. “I’m no longer in a fog and have gotten my motivation back. Before the surgery, I didn’t want to go anywhere or see anyone and I was really tired of seeing doctors. It’s made a huge difference in the quality of my life. I spent a lot of time and money and was exposed to a lot of radiation that produced conflicting information. When Dr. Karni got out his ultrasound and found the tumor, I said to myself, ‘This is the guy.’ If I could say one thing to physicians, it’s ‘Know your tools.’”