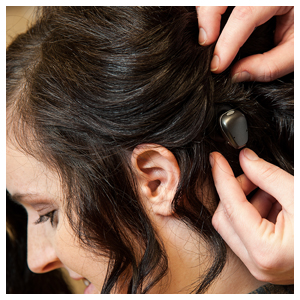 Between the 4th and 8th grades, Kaci Mueller suffered repeated ear infections and underwent more than 10 surgeries for cholesteatoma, including a canal wall down tympanomastoidectomy. Today, thanks to the skill of two expert practitioners in the Department of Otorhinolaryngology-Head & Neck Surgery at McGovern Medical School at UTHealth, Mueller is successfully negotiating the world of sound with a technologically advanced bone-anchored hearing system.

“When we first saw Kaci, she had significant hearing loss on both sides, with the left side more severe than the right,” says Sancak Yuksel, MD, an associate professor of otorhinolaryngology at the medical school. “We repaired the right eardrum and when we found that she had a fixed ossicle, we did an ossicular chain reconstruction and placed a prosthesis. She did well initially but later the prosthesis became displaced, and her hearing went back to baseline. In a second surgery, we implanted another prosthesis that returned her hearing to normal.”

After evaluation of her left ear, Dr. Yuksel thought she would benefit from a bone-anchored hearing aid, and placed a Cochlear™ Baha®, which bypasses the damaged middle ear, sending sounds directly to the inner ear. After recovering from the surgery, Mueller, who is 24, was in the office of audiologist Taylor Remick, AuD, CCC-A, for activation and programming of the device.

“Dr. Yuksel surgically implanted the internal portion of the Baha in Kaci’s temporal bone, and then I programmed the external processor, which anchors to the exterior skull through a magnet,” Dr. Remick says. “After programming it, we paired it to an app on her smartphone, which streams via Bluetooth to the implant, allowing her to control the volume and frequency-shaping programs through her phone or on the device itself.”

Mueller, who teaches prekindergarten in a Head Start program in Lake Charles, Louisiana, currently has five Baha programs that adjust for high-volume situations like her classroom, for road noise and for streaming devices. “If I’m in a conference at school, I can put my wireless microphone in the middle of the table to pick up voices and eliminate background noise,” she says. “I can listen to music directly from my phone and take calls through the sound processor.

Dr. Remick has been able to create programs for so many of my everyday environments. That’s the most exciting part – it’s been such a cool thing to be a part of and amazing beyond my expectations.”  If Mueller loses the external sound processor, her phone app allows her to track its location. If the processor battery is low, the phone alerts her. Dr. Remick also geo-tagged her school so that when she arrives in her classroom, the Baha detects her location and automatically switches to the volume-reduction school program.

“Growing up with hearing loss, I was offered so many accommodations and different devices, but I was self-conscious about all of them,” says Mueller, who makes the two-hour drive from Lake Charles to Houston twice a year for testing, cleaning and software updates. “I play guitar, write music and enjoy jam sessions. During the past two years I’d lost the ability to hear certain tones. After I got the Baha, the depth and precision of sound is so much more than I ever thought would be possible. I haven’t been able to put my guitar down since!”

“People ask me what it felt like when I first started wearing the Baha,” she says. “It wasn’t a big, remarkable change. It was all the little things I noticed. I could hear my foot tapping in the audiologist’s office. I could hear my turn signal clicking in the car. I’m so amazed to hear what I was missing out on. I can’t stop tapping people on the shoulder, asking did you hear that thunder, can you hear the rain falling, did you hear that background music? I am incredibly blessed to finally hear the sounds I never had the chance to experience before this surgery.”