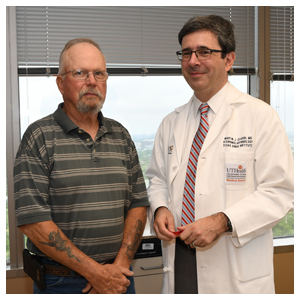 Sixty-six-year-old Norman Theeck is a rarity. A long-term survivor after treatment for invasive fungal rhinosinusitis, he beat the slim odds of survival with the help of Martin J. Citardi, MD, chair of the Department of Otorhinolaryngology-Head and Neck Surgery at McGovern Medical School at UTHealth.

In December 2012, Theeck went to his local ENT in Beaumont, Texas, complaining of bad sinus headaches. “Because I have heart disease, he didn’t want to put me under anesthesia, so he asked me how tough I am. ‘Pretty tough,’ I said.

An in-office endoscopic sinus biopsy revealed invasive fungal sinusitis, an uncommon disease most commonly caused by a group of molds called mucormycetes. Because of the high mortality rates associated with this condition, Theeck’s Beaumont ENT referred him urgently to physicians at the Texas Sinus Institute, the rhinology and skull base program of UT Physicians. Dr. Citardi, who is chief of otorhinolaryngology at Memorial Hermann-Texas Medical Center, assumed responsibility for Theeck’s care.

“Norman’s presentation was not classic but he did meet the diagnostic criteria for invasive fungal sinusitis,” Dr. Citardi says. “He came to us with a diagnosis of mucormycosis, a type of invasive fungal sinusitis, but his pathology here showed chronic granulomatous fungal rhinosinusitis. When the fungus gets into the blood supply, the tissue that depends on that blood supply begins to die.”

Dr. Citardi and his surgical team began with an extensive endoscopic dissection to debride the necrotic tissue infected with fungus. Two days later, they performed a second procedure to clear additional tissue.

“We repeat that procedure until the tissue looks normal – or we stop when we know there is no hope of controlling the infection,” he says.

Theeck received intravenous and, later, oral posaconazole, a powerful drug in a new class of medications called azole antifungals. The drug, which can cause an irregular heartbeat, affected his heart. During his three-month hospitalization at Memorial Hermann-TMC, he underwent quadruple coronary artery bypass surgery performed by Anthony Estrera, MD, medical director of the Cardiovascular ICU and Cardiovascular IMU at Memorial Hermann Heart & Vascular Institute-Texas Medical Center. Dr. Estrera is professor and chief of cardiac surgery and cardiothoracic surgery at McGovern Medical School.

Several months after his hospitalization at Memorial Hermann-TMC, Theeck underwent a third surgery performed by Dr. Citardi to remove a bony sequestrum from the floor of his frontal sinus; this bone had lost its blood supply during the long infection and slowly died even when the infection was well controlled. He now sees Dr. Citardi every few months for an in-office endoscopy to check the affected areas for relapse. 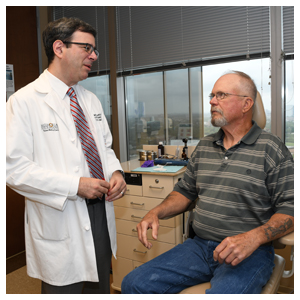 “I tell Dr. Citardi often that he’s my hero,” he says. “I went in weighing 230 and left weighing 158. The fungal sinusitis and heart surgery really knocked me down, so it took me a while to come back, but I’m doing fine now. I also have my wife, Janice, to thank. She was right there beside me 98 percent of the time. She slept in the room, and we ate together every day. I nicknamed her ‘Sarge’ because she pushed me to get back on my feet.”

Because of the high mortality rate associated with invasive fungal rhinosinusitis, Dr. Citardi didn’t expect his patient to live, especially when he needed urgent heart surgery. “Starting with day one, Norman is a complete save.”