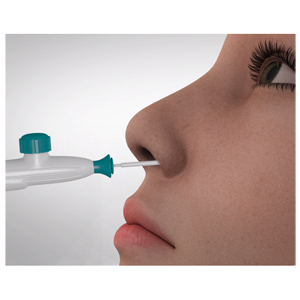 As he grew older, 42-year-old Jon Balter developed severe chronic rhinitis and sought help from allergists and ENTs for nearly a decade. After trying allergy shots and a variety of medications without success, he was referred by his allergist to Martin J. Citardi, MD, who used a breakthrough cooling technology to treat the disorder successfully.

“ClariFix® is a quick office-based procedure for the application of cryotherapy to nerves that control the rate of mucus production in the nose,” says Dr. Citardi, chief of otorhinolaryngology at Memorial Hermann-Texas Medical Center and professor and chair of the Department of Otorhinolaryngology-Head and Neck Surgery at McGovern Medical School at UTHealth. “We anesthetize the patient’s nose in our procedure room and apply the treatment to each side. After anesthesia, the treatment takes about two minutes. Because no IV sedation or general anesthesia is required, people return to normal activity after leaving the office. ”

Balter underwent the procedure in November 2017. “It was not bad at all,” he recalls. “Having the anesthesia applied was slightly uncomfortable, and after that Dr. Citardi inserted an applicator. The only sensation I had was a slight feeling of coldness. From arrival in his office to finish, including paperwork, it took a little less than an hour.”

Because Balter was his first ClariFix patient, Dr. Citardi was conservative in applying the technology. He retreated his patient’s left nostril the following February. “Even before we did the touch-up, he had remarkable results,” he says. “There is concern with the technology that it may produce too much nasal dryness, but we haven’t seen that. We’re treating something for which there is no good alternative effective over the long run. It’s a simple, elegant solution to a problem that makes a huge impact on quality of life for patients with chronic rhinitis. ”

Patients typically notice a difference within one to two days after the procedure. At one week, they should experience the full benefit.

“I’ve been suffering for nearly 20 years,” Balter says. “To have something cure it so easily was an amazing experience. The result has been fantastic.”