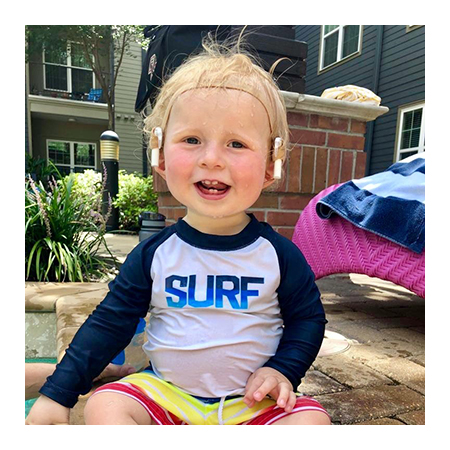 Nicholas Altong failed his newborn hearing screening. The test was repeated the following day, and he failed again.

When his pediatrician learned that he had failed both screenings, she ordered a test to measure brain response to sound and gave his mother, Ulrike Altong, a list of audiologists who could perform the screening. She chose Audrey Taylor, AuD, with UT Physicians Audiology at the Texas Medical Center. When Nicholas was 8 weeks old, his parents learned that he was profoundly deaf in the left ear and had minimal hearing in the right.  “Dr. Taylor walked us through treatment options and pointed out that Nicholas would qualify for cochlear implants due to his profound hearing loss. She referred us to Dr. Patki,” Altong says.

Aniruddha “Alok” Patki, MD, is a board-certified otologist-neurotologist and assistant professor in the Department of Otorhinolaryngology-Head and Neck Surgery at McGovern Medical School at UTHealth. “Before we take an infant to the OR for bilateral cochlear implantation, which under the best of circumstances is 4 ½ to 5 hours of anesthesia time, we want to try hearing aids,” Dr. Patki says. “Nicholas wore them for three months with no response. At his age, there should have been a noticeable difference in the way he responded to sound with the hearing aids.”
Whether Dr. Patki could do both cochlear implants in one surgery depended on how well the first implant went. “If we see a lot of bleeding in the first surgery, we don’t proceed with the second to limit blood loss,” he says. “Fortunately in Nicholas’ case, the surgery went smoothly, and we were able to place implants in both ears safely.”

Afterwards, Nicholas and his mother spent one night in the hospital. “The anesthesia was rough on his little body, but he recovered well,” Altong says.  Five weeks after the procedure, Dr. Taylor activated the implants. “At first Nicholas wasn’t reacting because he had never heard sound and didn’t know what it was,” Altong adds. “He’s now at the stage where he’s learning to identify sounds and respond. He’s making so much progress in his ability to hear in little steps each week. Learning to speak is our next goal.”
Dr. Taylor reprograms the implants every two months, adding more sounds as Nicholas progresses developmentally.

“In a child this young, parents have to commit to coming in regularly to program the implant settings and to help the child get used to the implants,” Dr. Patki says. “The Altong family has realistic expectations about the work they’ll have to do as a family to help Nicholas attain the same level of speech as a normal child. A smooth surgery is important, but the rest of it depends on the commitment of the parents and the skill of the audiologist.”

Ulrike Altong says Dr. Patki made himself available often in the evenings when they were worried and had questions. “This was all new to us and very overwhelming,” she says. “He held our hands and was always there for us, and Dr. Taylor has been wonderful to work with.”