Reconstructive Rhinoplasty Gives a Young Girl Her Confidence Back 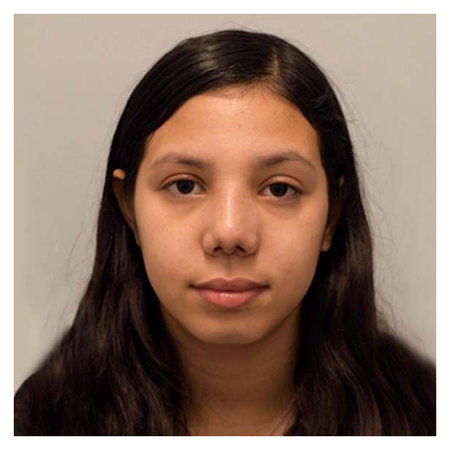 In mid-December 2020, 13-year-old Leighia Robles was crossing the street to get the mail when a pick-up truck approached her head on. She jumped out of the way but was hit in the face by the side-view mirror, crushing her nose. After being evaluated at a nearby community hospital, she was transferred to Children’s Memorial Hermann Hospital in the Texas Medical Center, where she was seen in the Level 1 Pediatric Trauma Center by the otorhinolaryngology team.

“Leighia suffered a nasal bone fracture that destroyed structural support for her nose,” says Tang Ho, MD, chief of facial plastic surgery in the Department of Otorhinolaryngology-Head and Neck Surgery and director of the Texas Center for Facial Plastic Surgery at McGovern Medical School at UTHealth. “The injury was disfiguring and also functionally devastating.”

Dr. Ho worked to schedule a reconstructive rhinoplasty at a day surgery center, where costs would be lower, because the family had no insurance, but Leighia had to wait until she turned 14 to be accepted for surgery at the facility.

“During those two-and-a-half months she began to lose her confidence,” says her mother Silvia Robles. “Thank God we had to wear a mask everywhere to protect against COVID-19. She would never take off the mask.”

Dr. Ho took Leighia to the OR on March 6, 2021. “Because her nasal bones and the cartilages were crushed, we had to remove the broken cartilage and piece it back together. Then we used it to build a new nose. Normally we might use ear or rib cartilage for the reconstruction, but given her young age we wanted to avoid that if possible. Fortunately, we were able to salvage enough cartilage to reestablish structural support, paying close attention to restoring cosmesis.”

The family is grateful. When Dr. Ho removed the dressings, they were so moved that they cried. “Dr. Ho was amazing,” Robles says. “He explained what he was going to do in words that Leighia could understand. She’s always felt like she’s the bomb, and we’re so happy that he gave her back her confidence.”