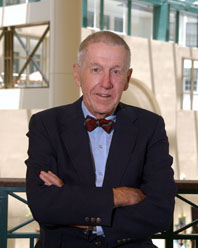 The Cheves Smythe Distinguished Lecture was established in 2006 to honor  Dr. Cheves Smythe, our first dean of McGovern Medical School from 1970 – 1975.  Dr. Smythe skillfully guided the School through its early years with his long-standing commitment to the fields of geriatrics and education and his exemplary standards of leadership.

Dr. Smythe was born and raised in Charleston, South Carolina, educated at Yale, and graduated from the Harvard Medical School in 1947. He was trained in internal medicine at the Boston City Hospital in Boston and Bellevue and Presbyterian Hospitals in New York. Research fellowships in the study of hepatic and renal physiology followed.   During the Korean War, he was assigned to the Naval Medical Field Research Laboratory, Camp Lejeune, in North Carolina, and was responsible for a variety of applied research ventures relative to military medicine.   After 11 years on the faculty at the Medical College of South Carolina and three years as Dean, he became Associate Director of the Association of American Medical Colleges.

He was then asked to organize McGovern Medical School at Houston in 1970 where he served until November 2011. During leaves of absence, he also served as Dean, Professor of Medicine and Chairman of the Department of Medicine at the Aga Khan University of Health Sciences in Karachi, Pakistan.

He is certified in both Internal Medicine and Geriatrics. He has been recognized as a devoted and appreciated teacher of clinical medicine, strengthening medical teaching at Lyndon Baines Johnson Hospital as well as assisting in the development of the geriatric medicine program.

An endowment has been established in Dr. Smythe’s name. Contributions should be made to :
UTHealth
Office of Development
7000 Fannin, Suite 1200
Houston, TX 77030

2020
Judith Campisi, Ph.D.
The Buck Institute for Research on Aging