Dr. Semenza is the C. Michael Armstrong professor of genetic medicine, with joint appointments in pediatrics, radiation oncology, biological chemistry, medicine, and oncology at the Johns Hopkins University School of Medicine. He serves as the founding director of the Vascular Program at the Johns Hopkins Institute for Cell Engineering and the founding director of the Armstrong Oxygen Biology Research Center.

Dr. Semenza received an A.B. (in Biology) from Harvard University and M.D. and Ph.D. (in Genetics) degrees from the University of Pennsylvania. He completed pediatrics residency training at Duke University Medical Center and postdoctoral training in medical genetics at Johns Hopkins. He joined the Johns Hopkins faculty in 1990. 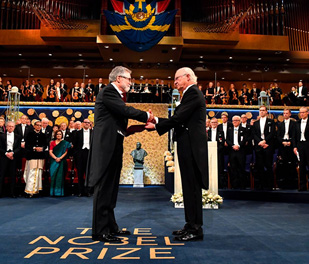 Dr. Semenza’s lab discovered hypoxia-inducible factor 1 (HIF-1), a transcription factor that controls the expression of thousands of genes in response to changes in oxygen availability, for which he received the 2019 Nobel Prize in Physiology or Medicine. His current research interests include investigating the molecular mechanisms of oxygen homeostasis and the role of HIF-1 in cancer progression. He has authored more than 450 research articles and book chapters, and his work has been cited by other scientists more than 160,000 times. Dr. Semenza is co-founder of HIF Therapeutics Inc., which is focused on the development of HIF inhibitors for the treatment of cancer and blinding eye diseases.