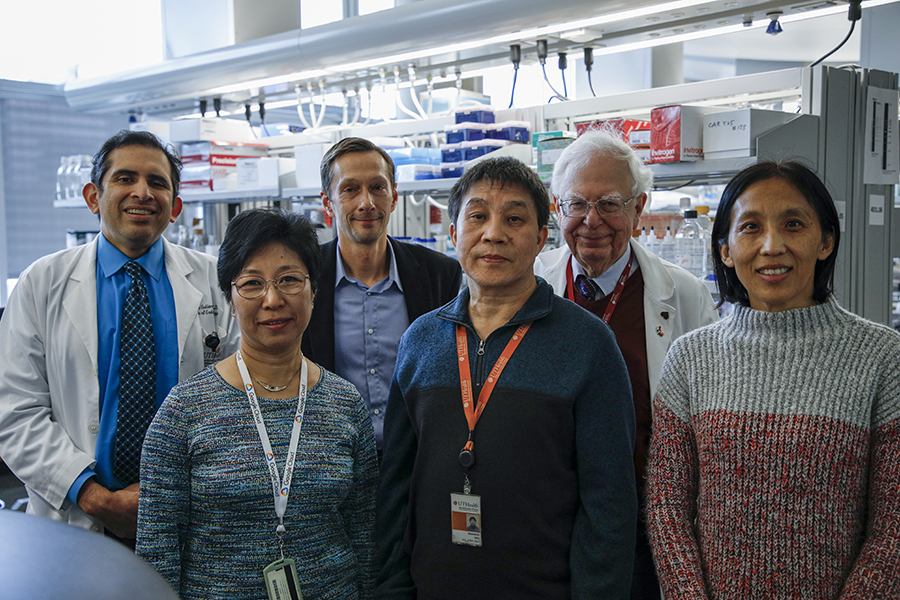 Recent research from the labs of Mikhail Kolonin, PhD, and Absalon Gutierrez, MD, has been published in Cell Reports Medicine. (Photo by Danny Palomba/Office of Communications)

A translational research study from collaborating laboratories of Mikhail Kolonin, PhD, and Absalon Gutierrez, MD, on the new mechanism mediating the anti-diabetic effects of incretins has been published in Cell Reports Medicine.

The global burden of Type 2 diabetes keeps rising in parallel with the increasing prevalence of obesity, a condition of white adipose tissue overgrowth. Frontline treatments include lifestyle changes, as well as the administration of insulin and of other glucose-lowering molecules that work through various mechanisms.

One class of molecules with anti-diabetes effect are analogs of incretins, the peptide hormones secreted in the gut. Glucagon-like peptide-1 (GLP-1) is an incretin signaling on cells in multiple organs. Anti-diabetic effects of GLP-1 and its analogs have been attributed to activating insulin production.

“Despite the progress in the understanding of incretin mechanism of action, there is still no clarity of how they affect organs other than the pancreas,” the authors said. “GLP-1 analogs also have anti-obesity effects that are not completely understood.”

According to the authors’ findings, GLP-1 mimetics induce the secretion of interleukin-6 by blood cells in pre-diabetic patients.

“This was surprising,” the authors said. “Interleukin-6 is an inflammatory cytokine and its chronic induction mediates various pathological conditions, including diabetes.” The results shed light on an alternative mechanism of action triggered by transient upregulation of interleukin-6 by GLP-1 analogs.

Adipose tissue, normally composed of white lipid-storing adipocytes, can develop anti-diabetic properties when it becomes populated with brown adipocytes, the mitochondria-rich cells specialized to burn lipids through non-shivering thermogenesis. Thermogenic fat tissue activation by prolonged treatment with GLP-1 analog liraglutide has been reported in mouse models. “However, the mechanism of adipocyte browning effect of incretins has not been fully understood,” the authors said.

The study shows that interleukin-6 signaling in adipocytes activates brown adipogenesis and thermogenesis, which contributes to the anti-diabetic effects of GLP-1 analogs. Using an antibody against interleukin-6, the authors showed that the blockade of interleukin-6 signaling can suppress a liraglutide-induced increase in thermogenesis and glucose utilization in preclinical models. Moreover, models lacking interleukin-6 receptors in adipose cells lack thermogenic adipocyte browning and metabolism activation upon liraglutide treatment, while still losing fat mass.

“Our study sheds new light on the role of GLP-1 signaling on the immune system and adipose tissue metabolism and establishes a previously overlooked mechanism,” the authors wrote.

The clinical contribution of adipocyte thermogenesis activation by GLP-1 analogs to their overall anti-diabetic effects in humans remains to be determined. It also remains to be established whether interleukin-6 signaling mediates the anti-diabetic effects of incretins in patients. Future research may establish the potential of interleukin-6 modulators for use in patients with metabolic disease.

The study, “Anti-diabetic effects of GLP-1 analogs are mediated by thermogenic interleukin-6 signaling in adipocytes,” published in Cell Reports Medicine was supported by the NIH grant R21DK122234 (PI: Gutierrez), the CCTS funded through NIH grants UL1TR000371 and KL2TR000370 as well as by the Bovay Foundation and the Levy Fund. Kolonin is a Professor and the Harry E. Bovay, Jr. Distinguished University Chair in Metabolic Disease Research.  Gutierrez is an associate professor in the Division of Endocrinology, Diabetes, and Metabolism.  Both are faculty at McGovern Medical School and the University of Texas MD Anderson Cancer Center UTHealth Houston Graduate School of Biomedical Sciences at Houston.