Sheila Coogan, MD, FACS of McGovern Medical School, Department of Cardiothoracic and Vascular Surgery at The University of Texas Health and Science Center at Houston is finalizing a recent project focused on a case study surrounding Abdominal Aortic Aneurysm (AAA).  Dr. Coogan’s work, while not yet published, discusses the long term return to a normal aortic diameter.  Coogan says, “The photo is from a patient treated 15 years ago.  Although his aneurysm was originally 5.2 cm in diameter, the most recent CTA, 15 years after his initial treatment with an endovascular aortic aneurysm repair, shows no evidence of an infrarenal aortic aneurysm.  He is essentially “cured.” His current aortic diameter is 2.8 cm.  Most patients treated with EVAR have aneurysm sac shrinkage—but [roughly] less than 1% have a complete return to a normal aortic diameter.” 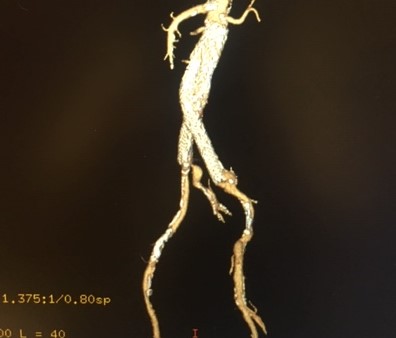 Endovascular aortic aneurysm repair (EVAR) is now the most common surgical technique applied for treatment of infrarenal abdominal aortic aneurysms.  The advantages of EVAR compared to open AAA repair is a decreased 30-day mortality. 4  Recently, the United Kingdom National Institute of Health and Care Excellence produced guidelines against the use of EVAR for unruptured AAA, writing:  “There is no evidence that EVAR for people with an unruptured infrarenal AAA provides long-term benefit compared with open surgical repair. While EVAR is associated with fewer perioperative deaths, it has more long-term complications, and these complications mean that people will need further procedures. There is some evidence that EVAR is associated with worse long-term survival than open surgical repair. EVAR also has higher net costs than open surgical repair. The evidence shows that, even if long-term benefits were achievable, they could not plausibly be sufficient to outweigh these costs. (5)

The goal of any infrarenal aneurysm repair is freedom from risk of rupture.  While success in most patients who undergo EVAR is defined as stable aneurysm diameter or sac shrinkage and freedom from rupture, there are, in fact, a small number of patients who have complete resolution of their aneurysm sac after EVAR.  These patients are “cured.”

Aneurysm sac shrinkage has been studied extensively; however, sac shrinkage is different than elimination of the aneurysm or cure.  The goal of this study was to analyze morphologic characteristics of the aneurysms in the patients who were “cured.”  We defined aneurysm “cure” as any infrarenal abdominal aortic aneurysm 5 cm or greater prior to intervention that regressed to 3.5 cm or smaller after EVAR. Only isolated fusiform infrarenal abdominal aortic aneurysms were included. Patient with juxtarenal aneurysms, iliac artery aneurysms, dissections, or saccular aneurysms were excluded.  The M2S database in Hanover, NH is a database that archives and analyzes aortic aneurysms.  We queried the M2S database for all patients who met these criteria.    The morphology and characteristics of these aneurysms was compared to a control arm of patients who were pre=EVAR AAA size matched, age and sex matched but whose maximal aneurysm diameter was never less than 4.5 cm post-EVAR  M2S data was de-identified.