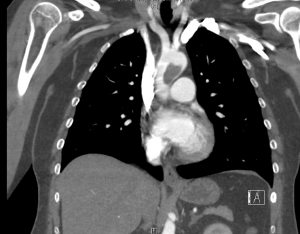 The presence of ascending aortic thrombus is a rare clinical entity. We present a case of peripheral embolization secondary to ascending aortic thrombus, successfully treated with aortic resection and graft replacement under deep hypothermic (21.0C) cardiopulmonary bypass. There are a few reports in the literature for surgical treatment of aortic arch thrombus. Herein we describe the cannulation strategy and operative technique for safe removal and reconstruction for a patient with MTHFR mutation and multiple embolic events.

The patient is a 47-year-old female who presented with acute onset right upper extremity pain and numbness and was found to have an occlusion of her right brachial artery. Her medical history includes MHTFR mutation, bilateral deep venous thrombosis with right popliteal artery thrombectomy four years prior. She was compliant with daily aspirin and clopidogrel. On physical exam, her right brachial artery pulse was present with no dopplerable signals distally. Admission chest computed tomographic angiogram (Fig. 1) demonstrated a large nonocclusive, multiloculated thrombus in the ascending and proximal transverse arch adherent to the lesser curvature, measuring 2.3 x 1.8 x 2.8cm. She was started on IV heparin to maintain therapeutic anticoagulation and underwent open brachial artery thrombectomy. Completion angiogram was negative for residual thrombus. Inflow to the hand was restored with alleviation of symptoms. 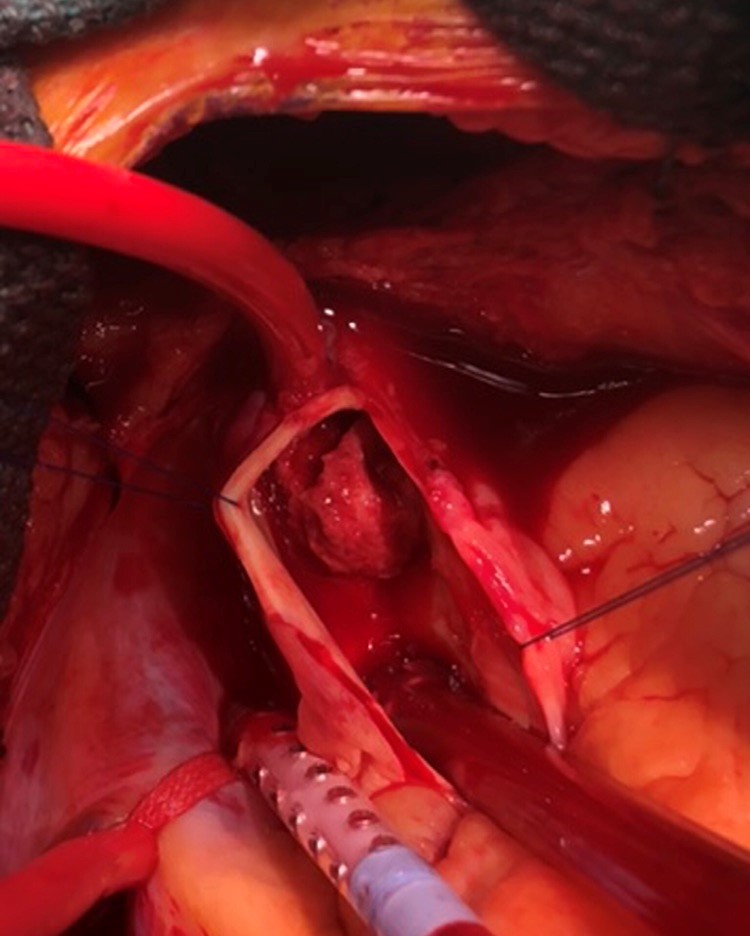 She was maintained on therapeutic anticoagulation and on postoperative day 4 she underwent resection and graft replacement of the ascending aorta and proximal transverse aortic arch. A median sternotomy was performed and epiaortic ultrasonography was used to identify a suitable area of the aortic arch for cannulation and opening. The patient was anticoagulated to achieve an activated coagulation time of >450 seconds. Cannulae were placed in the aortic arch anterior and distal to the mass (Fig. 2), which was further confirmed with epiaortic sonosite, the superior and inferior vena cava via the right atrium. A retrograde cardioplegia catheter was placed into the coronary sinus via the right atrium. A left ventricular sump was inserted via the right superior pulmonary vein and the superior vena cava was occluded using tourniquets. Total cardiopulmonary bypass and systemic hypothermia to a temperature of 21.0 was initiated. Blood cardioplegia was perfused at a temperature of 4.0. After retrograde perfusion of the brain was initiated via the superior vena cava, the ascending aorta was opened and a large, multiloculated organized fibrotic thrombus along the posterior wall at the distal ascending and proximal transverse arch junction along the lesser curvature was resected. The ascending and proximal transverse aortic arch were resected. A 24mm Gelweaved woven Dacron tube graft was sutured to the greater curvature of the arch in a beveled fashion using a running 4-0 polypropylene suture and the innominate artery was reimplanted onto the graft. Retrograde perfusion was stopped and cardiopulmonary bypass was begun via the graft side arm. The ascending aortic graft was then clamped and antegrade perfusion was restarted and the patient rewarmed. The aortic valve was normal appearing. The ascending graft was sutured to the proximal ascending aorta at the sinotubular junction using 4-0 polypropylene suture. Transesophageal echocardiography post-repair showed an intact aortic valve without evidence of aortic insufficiency. Her postoperative course was uneventful and she was discharged on Coumadin. Histopathological examination showed laminated thrombus with blood clot and no evidence of malignancy. 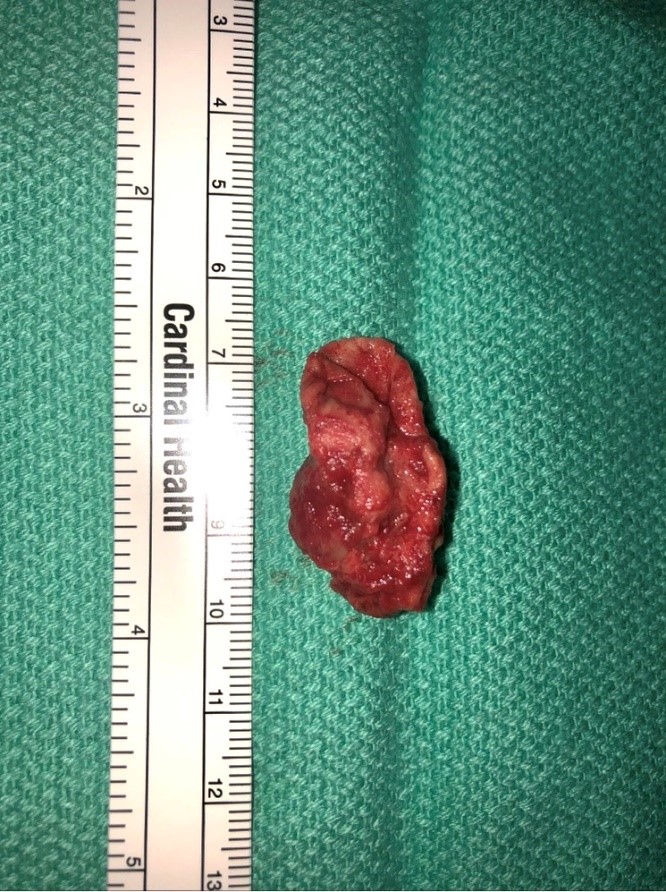 Intraoperative specimens sent to pathology consisting of (A) thrombus.

Although the cause of aortic thrombus is idiopathic in many patients, prothrombotic conditions have been described causing aortic mural thrombus (i.e., malignant neoplasms, thrombocytosis, polycythemia, hypercoagulable states, primary tumors of the aorta (8). Aortic thrombi can occur anywhere along the aorta and usually present with symptoms of embolic events, including myocardial infarction, stroke, upper or lower limb ischemia (9). Eguchi and colleagues (6) have suggested the role of turbulence in blood flow to be responsible for thrombus formation at this location, however, the exact mechanism of thrombogenesis remains unknown (6). Hypercoagulable states can contribute to intraarterial thrombus formation including MTHFR mutation (7). MTHFR mutation can lead to elevated levels of homocysteine and result in both venous and arterial thrombosis. Patients with MTHFR mutations with multiple thrombotic events require life-long anticoagulation. As such, the patient was discharged on aspirin, warfarin.

Prompt diagnosis and surgical treatment are indicated to prevent embolization. Current treatment strategies include anticoagulation, thrombolytic therapy, aspiration and open thrombectomy. However, the optimal treatment strategy has not been determined (3-5). A meta-analysis performed by Fayad et al. analyzed 200 patients from 98 articles and showed hypercoagulable states were present in 25% of the patients with the most common method or presentation as acute limb ischemia. They concluded that patients receiving anticoagulation as the primary treatment modality were more likely to experience a recurrent distal arterial embolic event, have recurrence or persistence of aortic mural thrombus, and undergo major limb amputation than their counterparts who underwent aortic surgery as the primary treatment modality. When the size of thrombus is large and mobile, surgical removal is the preferred treatment because of the risk of systemic embolism, repeated embolism, and medical treatment failure (2-5). Additionally, thrombolysis may not result in complete thrombus dissociation with the potential for further embolization. 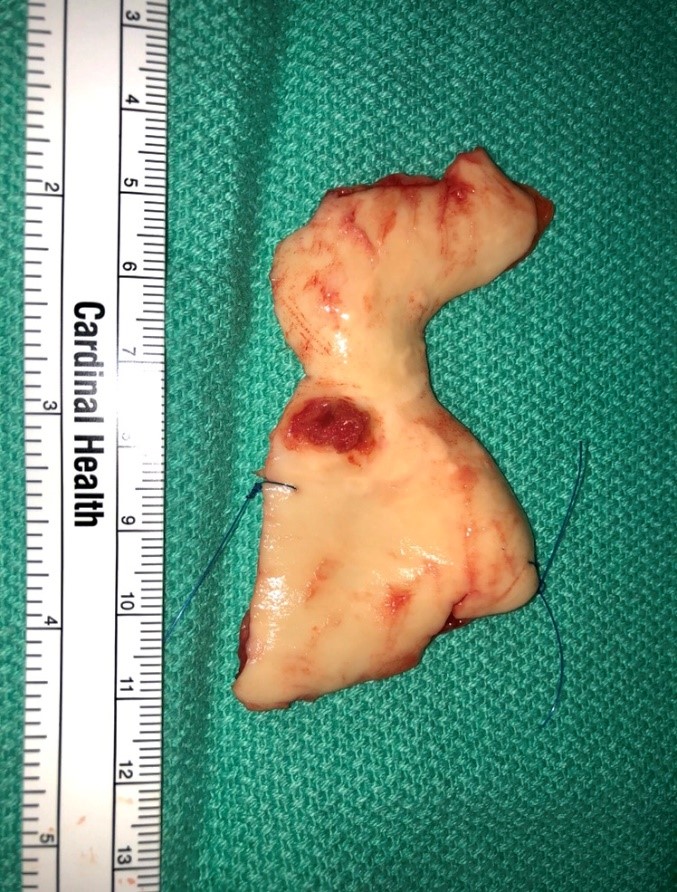 In our patient, the origin of the thrombus was located at the proximal aortic arch along the lesser curvature, approximately 2mm proximal to the innominate artery. There was no radiologic evidence of underlying malignancy, however the proximal transverse aortic arch was excised, thus removing the nidus for the thrombus in the event of malignancy. Our rationale for inserting the arterial perfusion cannula in the distal ascending aorta immediately distal to the mass was to prevent antegrade thrombus migration. This cannulation strategy has been described by Choi et al. (4) and allows for safe thrombus removal while preventing distal embolization, especially when the thrombus abuts the arch vessels. In order to avoid fragmentation of the mass and further embolization, the procedure was performed under deep hypothermic arrest without aortic cross-clamping as described by Nathan et al. (9). Alternate options for cannulation are via the femoral or axillary arteries, however, sonosite guided aortic arch cannulation is safe and straightforward. Retrograde flow from femoral artery cannulation may cause cerebral embolization of the floating thrombus. We have previously shown that retrograde cerebral perfusion is a safe, simple and efficient adjunct for cerebral protection in aortic arch surgery for deep hypothermic circulatory arrest (11).