Rosa Castillo was unaware that she had major health problems until her primary care physician, discovered high levels of calcium in routine blood work.  When the hypercalcemia persisted, she referred her to an endocrinologist.

About 99 percent of all cases of hypercalcemia are caused by a small tumor on a parathyroid gland, one of four small endocrine glands in the neck that produce parathyroid hormone (PTH), which controls the amount of calcium in the blood and bones.  They are usually located on the rear surface of the thyroid gland; in rare cases they are situated within the thyroid gland itself or in the chest.  After an experienced surgeon took Castillo to the operating room and discovered that the tumor was located deep in the neck, her endocrinologist referred his patient to Etan Weinstock, MD, FACS, who is an assistant professor in the Department of Otorhinolaryngology-Head and Neck Surgery at The University of Texas Health Science Center at Houston (UTHealth) Medical School and is affiliated with Memorial Hermann-Texas Medical Center.  Dr. Weinstock has a specialty interest in thyroid and parathyroid disorders.

“When I first saw Rosa, she had the classic symptoms of parathyroid adenoma – low energy and general weakness, and she had developed osteoporosis,” says Dr. Weinstock, who reviewed her prior studies and ordered a CT scan in preparation for re-operation in the same region of the neck.  “Her CT results were also suggestive of adenoma. We scheduled her for surgery.”

During surgery for parathyroid adenoma, the monitoring of parathyroid hormone (PTH) levels in the blood, particularly when highly elevated, can be useful in predicting whether all hyperfunctioning parathyroid tissue has been removed before the patient leaves the operating room. PTH monitoring can also help promote confidence in a smaller surgery, which minimizes neck dissection and prevents the injury or removal of normally functioning glands.

“PTH lives in the bloodstream for a short period of time so we test repeatedly during a procedure – pre-incision, immediately prior to excision and again at five minutes post excision,” Dr. Weinstock says. “For example, if the intraoperative PTH is 200 before the procedure and drops to 75 five minutes post excision, we know we have the culprit.  What we’re looking for is a drop of at least 50 percent. But because Rosa’s parathyroid hormone level was just above normal, we knew that any drop after excision would only fall into the normal range – 10 to 55 picograms per milliliter.  We had to find and remove the abnormal gland and use another method to confirm our success.”

The method  was an intraoperative staining technique performed by pathologist Robert E. Brown, MD, who holds the Harvey S. Rosenberg, MD, Chair in Pathology and Laboratory Medicine at McGovern Medical School. Once Dr. Weinstock had located the lesion, he sent a biopsy sample to Surgical Pathology while Castillo was still under anesthesia.

“We expedite examination of the sample to avoid exposing the patient to anesthesia longer than necessary,” Dr. Brown says.   “If we suspect a parathyroid lesion, we stain part of a frozen biopsy section with Sudan IV, a fat soluble dye, as well as routine hematoxylin-eosin to determine whether or not the tissue has adenomatous features.” 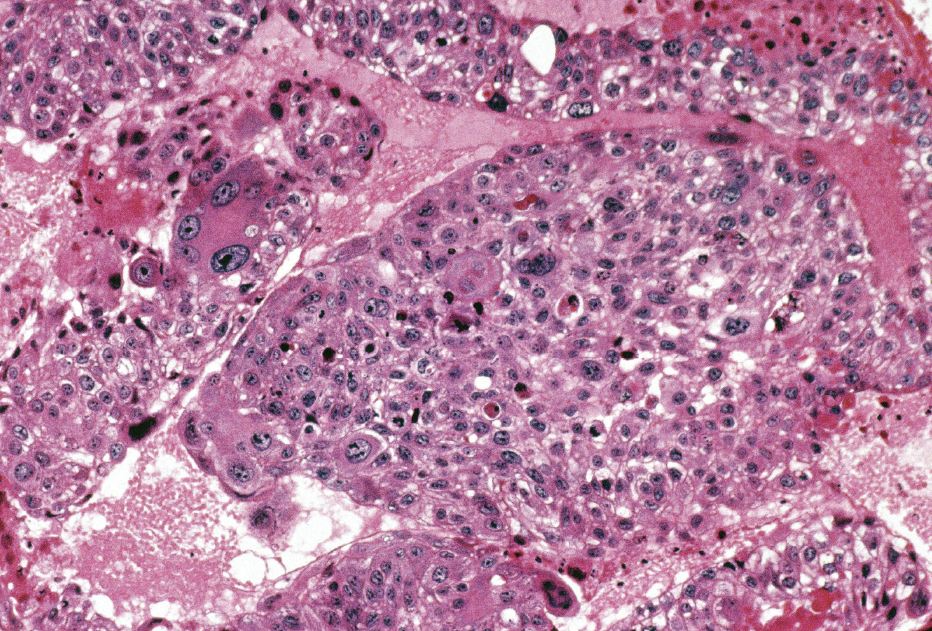 Adenomatous changes include extremely large nuclei and/or mulberry nuclei.  “But getting accurate results can be complicated,” he says.  “For example, one of the four parathyroid glands may have its cellular calcium sensor set to high that it virtually never shuts down, or the gland may be partially suppressed by another gland with a higher calcium threshold.  So we have to look further.  Using the Sudan IV stain, we can tell whether or not the cell is actively cycling and secreting hormone or whether it’s in a resting state.”

With Dr. Brown’s help, Dr. Weinstock located the culprit parathyroid and removed it.  “As a re-operative neck, it was a difficult procedure,” he says.  “The structures of the neck are delicate, and there was scarring from the previous surgery, which obscures the normal boundaries between tissues, nerves and major arteries and veins.  In a procedure of this type, we’re careful not to damage the recurrent laryngeal nerve that supplies sensation and function to the larynx.  The parathyroids are very small, very delicate and often difficult to find. Because of their embryonic origin, they can vary in location.  It helps to have a really good team with all the right tools.  We found the adenoma, got the confirmation we needed from Dr. Brown and finished the procedure.”

Rosa Castillo noted an immediate increase in energy following the surgery. “I hadn’t even noticed how tired I’d gotten, she says. “On my lunch hour I’d take a quick nap and was ready to go again.  Since my surgery, I haven’t needed that nap.  I feel fantastic.”