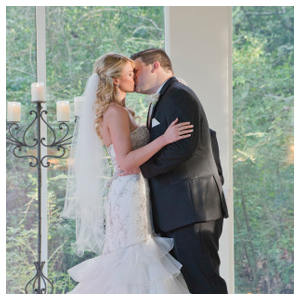 Two weeks before her wedding, 27-year-old Leslie Horne was driving from her new home in Fulshear to a friend’s house in Magnolia, about an hour away. She never arrived.

“I don’t remember that day or the accident at all,” she says now, two years later. “I assumed I put my friend’s address in my GPS since I’d never been to her house. Later I learned that I was hit at a county road intersection by a woman in a truck pulling a horse trailer.”

Horne was transported by Memorial Hermann Life Flight to the Memorial Hermann Red Duke Trauma Institute at Memorial Hermann – Texas Medical Center with three skull fractures, one of which was in the temporal bone on her left side. The pressure in her brain normalized within 24 hours. She later learned that her middle ear was crushed.

After discharge, she was referred to Ibrahim “Trey” Alava, MD, an assistant professor in the Department of Otorhinolaryngology-Head & Neck Surgery at McGovern Medical School at UTHealth. Her complaints were facial paralysis and conductive hearing loss in her left ear.

“When I first saw Leslie, her facial paralysis was improving,” Dr. Alava says. “Because the vast majority of patients recover, we decided to watch and wait. She was back to normal in her second follow-up visit.”He also referred her to TIRR Memorial Hermann Outpatient Rehabilitation- at the Kirby Glen Center for vestibular rehabilitation. “After rehab and a lot of TLC, her only remaining complaint was conductive hearing loss,” he says. “We observed her for a couple of months. When she failed to recover hearing in her left ear, we repeated a CT scan of the temporal bone and saw that a fracture line had caused a disruption of the ossicles.”

As a result of part of the fracture going through the ear canal, Dr. Alava was able to see only half of her eardrum. “I didn’t get a good physical exam so I couldn’t tell her what I was seeing,” he says. “I always explore all options with my patients, from the least invasive to the most invasive. So, I told her there were three conventional solutions: to do nothing because her hearing loss was moderate, to try a conventional hearing aid, or to surgically place a bone-anchored hearing aid to bypass the damaged middle ear and send sound directly to the inner ear. Or, as a fourth option, I could explore her middle ear in the OR. If the bones were dislocated, I could remove them, place an implant and reconstruct her eardrum.”

There is no cookie-cutter approach to the treatment of traumatic ossicular chain discontinuity. “I couldn’t give Leslie any results for the specific procedure because I would have to devise the surgical plan in the OR after opening her ear and investigating,” he says. “I told her that I do a lot of middle-ear surgery, and that I could try to predict her outcome based on the experience of my patients, who have done well, but that I couldn’t guarantee anything for this particular procedure.”

Physician and patient discussed the risks in depth, and Dr. Alava gave her outcome percentages quoted in the medical literature. Horne tried a conventional hearing aid for a few weeks and found that it was not what she wanted. In the end, she chose the middle-ear exploration and ossicular chain reconstruction.

“I couldn’t hear so I figured what I have to lose?” she says. “We met on several occasions during which I gained a lot of trust in Dr. Alava. He promised me if he couldn’t fix it, he wouldn’t do anything to make it worse. I was willing to take the risk.”

In the OR, Dr. Alava found a fractured and rotated malleus completely dislocated from the incus, which was dislocated from the stapes. He also found a perforation in her eardrum that he was unable to see on CT or physical exam. “So she had a hornet’s nest,” he says.
He drilled out the ear canal, which was twisted from the fracture, and removed the malleus and incus, replacing them with a titanium partial ossicular chain reconstruction prosthesis. He reconstructed her eardrum with cartilage from the ear and fascia from the temporal muscle. When he saw her for her second postoperative appointment, almost 100 percent of her hearing had returned.

“I was astonished,” Dr. Alava says. “I was expecting improvement but nothing that dramatic.”

Horne and her fiancé, Ron Hessel, had planned to marry Feb. 13, 2015, at Ashton Gardens, a forested wedding venue in Houston. They postponed their formal wedding and instead were married in front of the fireplace at their home.

“My head was shaved and the left side of my face was still paralyzed,” she recalls. “I wore jeans and a white hoodie that said ‘Bride’ on the back.”

She finally got to wear her wedding dress in June 2016 at a formal ceremony held at Ashton Gardens. “My husband was in shock after the accident,” she says. “His biggest fear was that I would regain consciousness and not remember him or not like him anymore. I remember looking in the mirror and crying. I’d worked out with a trainer for six months and had just gotten my hair highlighted the perfect shade of blonde for the wedding. When I woke up and realized that my head had been shaved, I told him I’m sorry you have to marry an ugly boy. He said you’re just as pretty as the day I met you. He’s been completely patient and 100 percent supportive, and had confidence in us and faith that I would make it through.”

Horne’s hearing now tests in the normal range. “The hearing I have post surgery is dramatically better than it was with the hearing aid,” she says. “My experience with Dr. Alava was awesome. He always used this analogy: I can’t promise you a home run, but I’m really going to go for it. After my first hearing test, I asked, ‘Did we get a home run?’ and he said, ‘We did.’ It was perfect.”