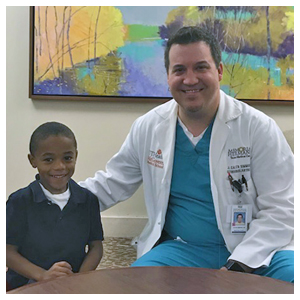 When J. Caleb Simmons, MD, started medical school, he thought he might be a pediatrician. Today as an otolaryngologist, nearly half of his practice is pediatric. “I enjoy kids, so it’s great to have them as a significant part of my day,” he says. “I share their sense of humor, so we do whatever it takes to have some fun during the office appointment. I also enjoy watching them grow up over time. At one point, we had five siblings on our clinic schedule. The more the merrier.”

While working the Department’s ambulatory clinic at Texas Medical Center, he first saw Qwintera Tallamon and her then five-year-old son, Jairdan Collette. Tallamon had noticed a small knot – about half the size of a dime – on her son’s neck when he was about two years old. She saw it again shortly afterwards in church, when he was looking up.

Her pediatrician diagnosed it as a swollen lymph node, likely triggered by an infection, and suggested watchful waiting. But when Jairdan was three, it flared up again. After seeing doctors and undergoing testing at two different clinics, she was referred to Dr. Simmons, who recognized it as a branchial cleft cyst, a type of congenital anomaly of the midline neck.

“Branchial cleft cysts occur during pregnancy when tissues in the neck and branchial cleft fail to develop normally, resulting in a pouch of fluid in the neck,” Dr. Simmons says. “Most of the time it presents as a neck mass that waxes and wanes in size and can sometimes become painful and cause fever. Once antibiotics are given, it calms down and usually leaves a neck mass. If the cyst becomes infected often enough, a fistula may develop in the tissue of the neck.”

“We both felt that the best decision was to remove the cyst while Jairdan was young,” Tallamon says. In October 2016, Dr. Simmons took her son to the OR at Children’s Memorial Hermann Hospital in the Texas Medical Center, where he performed a complex two-hour surgery.

“We make a horizontal incision in a neck crease and dissected around the blood vessels and muscles of the neck, back to the lingual tonsil,” Dr. Simmons says. “We place a small drain in the wound that remained for a day or two and made a cosmetically pleasing closure that eventually faded into a crease in the neck.”
Jairdan was hospitalized overnight and bounced back quickly. “He was happy and active immediately after the surgery,” his mother says.

“He’s a cute little kid, and they’re a wonderful family,” Dr. Simmons says. “He loves gloves and the minute he walked into my office, he wanted his own pair of latex gloves. We had some fun blowing up a glove like a balloon.”

Tallamon was impressed with Dr. Simmons’ bedside manner and follow-up. “I could tell it was more than just a job to him,” she says. “He really cares about Jairdan and called me afterwards to check on him. He was passionate about his work and very patient. They rolled Jairdan into surgery with latex gloves on his hands, and being able to see Dr. Simmons for follow-up at his clinic in southeast Houston was more convenient than going back to the Texas Medical Center.”

The Department of Otorhinolaryngology-Head and Neck Surgery at McGovern Medical School has a presence on the campuses of Memorial Hermann Southeast Hospital and Memorial Hermann Pearland Hospital. Staffed by Dr. Simmons as well as Michael Byrd, MD, the department’s UT Physicians community practice coordinates care for adult, adolescent and pediatric patients at Memorial Hermann Southeast Hospital, Memorial Hermann Pearland Hospital, Memorial Hermann-Texas Medical Center and Children’s Memorial Hermann Hospital. The latter two are the primary teaching hospitals for McGovern Medical School at UTHealth.  “We’re a special type of ENT practice, since we can provide comprehensive ENT services to patients who live in outlying suburbs,” Dr. Simmons says. “We can schedule surgeries close to home or, for more complex cases like Jairdan’s, at the Texas Medical Center. For patients with complicated ENT issues, we offer the benefit of surgery at a renowned academic medical center, with presurgical consultation and follow-up visits in the community.”