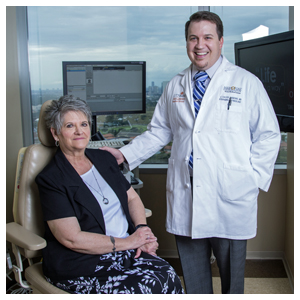 Joy Helminski was first diagnosed with sleep apnea six years ago and was prescribed a CPAP. With her small features, she had difficulty finding a mask to fit her face.  “My doctor said I’d have more energy, feel better, and that the CPAP would help my blood pressure,” says Helminski, who lives in League City, Texas. “I still felt tired all the time, and I’d go in and tell him that nothing was different.”

About a year ago, she learned about the Inspire® hypoglossal nerve stimulator on Facebook and began an internet search of physicians who perform the procedure. She found otolaryngologists Michael Byrd, MD, and J. Caleb Simmons, MD, the only two physicians in the Houston area who perform the procedure. Both are affiliated with Memorial Hermann Southeast Hospital, not far from her home, and hold faculty positions at McGovern Medical School at UTHealth. She called the office in December 2017 and made an appointment.

“About 50 percent of people with sleep apnea diagnosed by a sleep study are unable to tolerate CPAP,” says Dr. Simmons, an assistant professor in the Department of Otorhinolaryngology-Head and Neck Surgery at McGovern Medical School at UTHealth. “They have increased risk of heart attack, stroke, and high blood pressure as well as risk of car or work-related accidents due to lack of good sleep.”

Helminski underwent another sleep study at Memorial Hermann Southeast, the results of which confirmed that she was a candidate for hypoglossal nerve stimulation. To qualify, patients must be age 22 or older, have an apnea-hypopnea index (AHI) from 15 to 65 on a diagnostic sleep study, and be unable to use CPAP for various reasons. They must also undergo an outpatient drug-induced sleep endoscopy (DISE) procedure to examine the soft palate anatomy. On DISE exam, a patient must have an anterior-posterior soft-palate closure pattern rather than concentric collapse in order to be a candidate for implantation.

“Our target BMI for patients is 32 or below, which is a soft guideline set by the FDA,” Dr. Simmons says. “If patients weigh more, we ask them to start losing weight before surgery to reach the target so they can achieve more benefit from the device.”

The outpatient implantation procedure takes about two hours, and most patients do not require antibiotics or steroids after surgery. Pain can be controlled by over-the-counter pain relief medications, as it is much less painful than many other sleep surgeries. The implant has three components: a pressure sensor, generator and central processing unit, and a stimulator cuff.

“We isolate the hypoglossal nerve and wrap the stimulator cuff around it,” Simmons says. “A wire connects the cuff to the CPU and generator, which is implanted in the right side of the chest much like a pacemaker. The pressure sensor is placed between the intercostal muscles between two ribs so that when the patient inhales, the movement is detected and data is sent to the CPU. The stimulator receives the information and stimulates the tongue to move forward to keep the airway open.”

After the device is implanted, the surgical team tests stimulation of the tongue in the OR to ensure proper placement of the cuff. Then they check the sensor in the chest wall before turning the system off to allow the patient time to heal.

“A month after surgery, we use an induction device to turn it on in clinic and set a minimal stimulation level, then give the remote to the patient, who activates the device by holding the remote over the CPU and pushing a button to turn it on,” Dr. Simmons says. “There’s a 30-minute ramp-up period to allow the patient to fall asleep before the stimulator is activated. Every night the patient turns the stimulation level one click higher until it reaches the maximum range we’ve set. Two months after the surgery, the patient returns to the sleep lab for a study while using the device. Sleep technologists adjust the stimulation to get the best possible sleep result.”

The Stimulation Therapy for Apnea Reduction (STAR) clinical trial, involving 126 patients with obstructive sleep apnea at 22 centers in the United States and Europe, began in 2010 to evaluate the safety and efficacy of Inspire therapy. One-year STAR trial results were published in the New England Journal of Medicine in January 2014 and Inspire therapy received approval by the FDA the following April. More long-term, 5-year STAR trial outcomes show that sleep apnea patients who received Inspire therapy experienced significant and sustained reductions in sleep apnea events and significant improvements in both quality of life and daytime functioning, as measured by questionnaires.

“Within two weeks after the device was activated, I felt like the sun had come out,” says Helminski, who is 67. “I’ve been a light sleeper all my life, and the device has improved the quality of my sleep. The difference in how I feel is amazing! I don’t have that dragging feeling at 10 in the morning or 3 in the afternoon. I get home from work and still have a lot of energy.”

For more information about this exciting technology, please visit www.ent4.me/sleep-better.