Four-Handed Surgery: Robotic Excision of Benign Tumor of the Soft Palate and Reconstruction 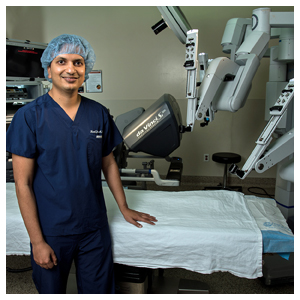 When Kathleen Sibirtzeff went for her periodic dental checkup in April 2018, her dentist discovered what turned out to be a benign tumor of the soft palate. “I could see it and it felt a little pillowy on the upper right side of my palate, but it didn’t hurt and I didn’t think much of it,” Sibirtzeff says. “I’m very sensitive to any symptoms I have, but this was not an annoyance, although it was very visible to others.”

Her dentist referred her for biopsy to Michael Byrd, MD, an assistant professor in the Department of Otorhinolaryngology-Head and Neck Surgery at McGovern Medical School at UTHealth. “I moved as fast as my appointments would allow me to,” she says. “I wasn’t going to sit on this, because it could have turned out to be more serious. The biopsy was negative, but Dr. Byrd advised me to have the tumor removed.”

He referred her to his colleague at Memorial Hermann-Texas Medical Center, Kunal Jain, MD, a head and neck oncology and microvascular reconstruction specialist and an assistant professor of otorhinolaryngology at McGovern Medical School.

“For these benign salivary gland tumors, the only treatment is surgery,” says Dr. Jain, who specializes in transoral robotic surgery (TORS) of the oropharynx. “The robot allows us better visualization of the area and access to sites that traditionally have been difficult to approach, and it also affords us the ability to perform an en bloc resection. A continuous shell of healthy tissue covers these tumors. If we burst the surrounding capsule, there’s a greater chance of recurrence. The bedside assistant helps with retraction and suctioning, and we use the two arms of the robot to excise it. It’s basically a four-handed surgery that offers the ability to see the tumor clearly and remove it intact without invading the capsule.”

Dr. Jain also used a flap of buccal fat from the cheek, tunneling under his patient’s teeth to cover the 3-centimeter defect left when he removed the elongated tumor. “This approach allowed her to begin eating almost immediately following surgery with no pain,” Dr. Jain says. “Her speech also was unaffected.”

From Sibirtzeff’s perspective, the surgery went well. “I woke up very quickly after anesthesia and had my wits about me,” she says. “I could eat soft foods right away. Dr. Jain is thorough and has good rapport with patients. He tells you what could happen during and after surgery, but he cushions it with a positive viewpoint. It all went very well. Like most patients, I was waiting for the other shoe to drop, but so far it hasn’t.”