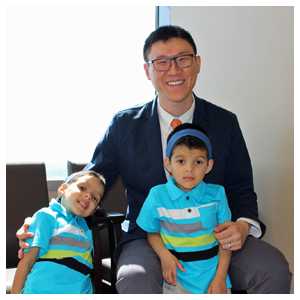 Identical twins Sergio and Jorge Rodriguez like the same things – playing soccer, baseball and riding their bikes. They were born on Nov. 13, 2013, with the same type of hearing loss. Thanks to the surgical skill of Zi Yang Jiang, MD, and follow-up speech therapy, the boys are learning to express themselves like normal four year olds.

“We don’t know the exact cause of the twins’ hearing loss, although premature birth puts babies at higher risk,” says Dr. Jiang, a fellowship-trained pediatric otolaryngologist and assistant professor in the department of Otorhinolaryngology-Head and Neck Surgery at McGovern Medical School at UTHealth. “The hearing system is intricate and develops very early in life. Even when everything appears to be normal, problems may exist.”

The boys’ parents, Nereyda Dominguez-Asencio and Sergio Rodriguez, started noticing their sons’ hearing loss when they were about a year old. “Jorge would be watching TV and wouldn’t pay attention when I talked to him,” Rodriguez says. “I could tell he had some degree of hearing because when I got close to him and talked, he turned to look at me.”
They found Dr. Jiang when a nurse in their pediatric ophthalmologist’s office referred them to the Department of Otorhinolaryngology. Two weeks later they were in Dr. Jiang’s office for a hearing evaluation.

“Their condition is relatively rare,” he says. “To the naked eye, their ears are normal. Even on MRI, we could see their cochlear nerves, but since they weren’t firing in synchrony, Sergio and Jorge were unable to process what they were hearing.”

When the results of the evaluation came back, Dr. Jiang gave the family two options – hearing aids or cochlear implants. “We decided to try the hearing aids for a few months to see how they worked out,” Dominguez-Asencio says. “When we came back for our follow-up appointment after six months, we realized that Jorge’s hearing hadn’t improved with the hearing aids. Because Sergio had the same issue, we decided on implants for both of the boys.”

Sergio and Jorge were two years old when Dr. Jiang took them to surgery. “Under the microscope, structurally, the inner ear was a little distorted, which made implantation more difficult. Because of the malformation, we had to drill away bone covering the cochlea.”

Jorge was discharged the day of surgery, and Sergio stayed one night to allow his food intake to normalize. They recovered very quickly after surgery and their implants were soon activated.  “Dr. Jiang did a good job of explaining everything and being supportive,” Dominguez-Asencio says. “If they get sick, we call the office and he’s there for us. Sergio’s hearing has improved the most, and he expresses himself better. Jorge is learning from his brother. They’re now able to tell us what they want, which is a big improvement. We’re very happy with the results.”