The Importance of Depression Screening in Rhinology Practice 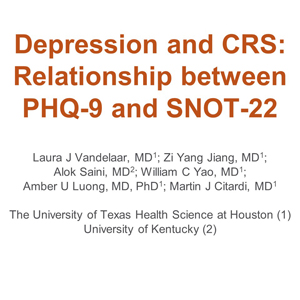 A study by physicians in the Department of Otorhinolaryngology at McGovern Medical School at UTHealth suggests that depression may be underdiagnosed in patients with chronic rhinosinusitis (CRS). In a paper presented at the American Rhinologic Society, the researchers assessed the prevalence of depression in a rhinology practice by comparing results of the Patient Health Questionnaire-9 (PHQ-9), a depression screening tool, to the 22-item Sinonasal Outcome Test (SNOT-22) used to screen for sinonasal symptoms.

“While CRS has been associated with depression, the prevalence of depression among CRS patients is not well-described in the literature,” says Martin J. Citardi, MD, professor and chair of the Department of Otorhinolaryngology-Head and Neck Surgery at McGovern Medical School. “Our study showed that depression rates, as estimated by PHQ-9 responses, are similar to those in all chronic disease populations, and that higher SNOT-22 scores are associated with higher PHQ-9 scores. This becomes important when you consider that CRS has a prevalence of more than 10 percent in the U.S. population.”

Prior studies have found a correlation between decreased sleep and depression with both CRS and allergic rhinitis (1). “Patients with CRS have reported lower overall quality of life scores and high rates of poor sleep, which affects productivity,” Dr. Citardi says.

A study of a multi-employer database in the United States showed that sinusitis and depression were among the top 10 most costly health conditions (2) CRS with comorbid depression leads to more lost workdays and greater decrease in productivity1 as well as greater use of health care dollars (3, 4).

“Although studies have shown a relationship between CRS and depression, the underlying pathophysiology is unclear,” Dr. Citardi says. “We do know that depression can have important implications on treatment outcomes in rhinology patients. We expect this to lead to more studies that will help us understand the effects of comorbid conditions and CRS on patient quality of life.”  The researchers’ conclusions are based on a retrospective chart review including all adult rhinology patients who presented to a tertiary rhinology practice for the two-month period between March 1, 2018, and April 30, 2018. Only the first patient visit during the period was included. All patients underwent standard history intake and documentation, including the PHQ-9 and the SNOT-22, as well as physical examination by a staff rhinologist, which was recorded in the electronic medical record.

The paper, “Depression and CRS: Relationship between PHQ-9 and SNOT-22,” was presented by fourth-year otorhinolaryngology resident Laura Vandelaar, MD, at the ARS spring meeting in National Harbor, Maryland. In addition to Dr. Vandelaar, the authors are Zi Yang Jiang, MD; William C. Yao, MD; Amber U. Luong, MD, PhD; and Martin J. Citardi, MD, McGovern Medical School; and Alok Saini, MD, who has completed his fellowship in rhinology and skull base surgery at McGovern Medical School before joining the Department of Otolaryngology-Head and Neck Surgery at the University of Kentucky. The manuscript has been accepted for publication in Otolaryngology-Head & Neck Surgery.