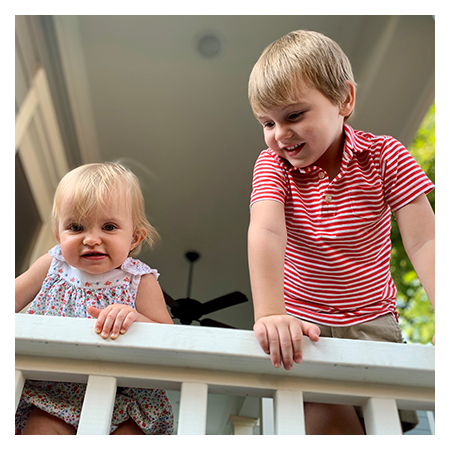 When Elizabeth Maddox failed her newborn hearing screening after an early delivery by cesarean section, her pediatrician referred her to Audrey Taylor, AuD, with UT Physicians Audiology, the clinical practice of McGovern Medical School at UTHealth. This was familiar territory to Elizabeth’s mother, Michelle Maddox, whose three-year-old son Elliott was seen by UT Physicians Audiology after his birth in 2017.

“Elizabeth’s ear exam was normal, but after an ABR, we diagnosed her with mild to moderate sensorineural hearing loss and fit her with hearing aids,” says pediatric otorhinolaryngologist Sancak Yuksel, MD, an associate professor in the Department of Otorhinolaryngology-Head and Neck Surgery at McGovern Medical School. “She continued to follow up with Dr. Taylor.”

Elliott’s case was more complex. At his 18-month pediatrician appointment, he was not meeting his developmental milestones for language. “He knew some words and interacted well with other kids, but without talking,” Maddox says. “We have a history of late talkers on my husband’s side of the family. Elliott was the eighth of 10 grandchildren and almost all of them started talking later than normal. My pediatrician said we could be really aggressive and start speech therapy, or we could wait and see what happens in the next six months. Given our family history, we decided to give it a little time.”

When Elliott was still behind in speech at two years, his pediatrician referred him to UT Physicians Audiology for a comprehensive ABR, and he started speech therapy at TIRR Memorial Hermann Outpatient Rehabilitation-Greater Heights. “His therapists were dumfounded by his scenario,” Maddox says. “He literally did everything we asked but didn’t speak.”

At UT Physicians Audiology, Elliott was assigned to Taylor, who did an unsedated ABR that detected hearing loss in both ears. “Two years is pretty old to attempt an unsedated ABR,” Dr. Taylor says. “We tried to do it during naptime without success. We had to refer him out for a sedated ABR.”

The results confirmed that Elliott had moderate to severe sensorineural hearing loss in both ears. He was fitted with hearing aids in October 2019, when he was 2 1/2 years old. His parents enrolled him at The Melinda Webb School at The Center for Hearing and Speech in Houston three months before it closed temporarily in March 2020 in response to the COVID-19 pandemic.

“Elizabeth was our easy one because we caught her hearing loss early,” Maddox says. “She’s going to speech therapy once a month to make sure she’s meeting all her developmental milestones. Our goal for the two of them is to start kindergarten with their age groups.”

“It’s very hard to be told your children have hearing loss,” says Taylor, who was diagnosed with hearing loss at age 4. “As a parent you want the absolute best for your child, and that is something that we as clinicians want as well. It’s important to help educate other family members, friends, and even other teachers or children at the child’s daycare or school. When they understand more about hearing loss and how hearing aids help, they can be on the child’s team as well. Children with hearing loss are smart, creative, fun, and have a full life ahead of them so we want to give them every opportunity possible.”

Taylor checks on her pediatric patients at least every six months to make sure they’re getting maximum benefit from their hearing aids. She says the Maddox family has been a great family to work with.

Michelle Maddox shares her view. “Dr. Yuksel is a wealth of knowledge and keeps tabs on us without having to see us in the office,” she says. “Dr. Taylor has been my person. She’s always happy to answer my questions, and she connected us with other resources in Texas. She really has been just great for our family.”