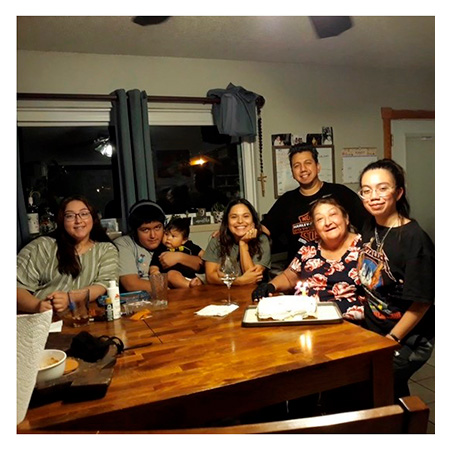 In 2005, Olimpia Almazan was diagnosed with systemic scleroderma, one of a group of rare diseases that involve hardening and tightening of the skin and connective tissues. A few years later, she developed hearing loss.

“I used to take my kids to the ENT clinic at UT Physicians in Memorial Hermann Medical Plaza when they were young, and their doctor thought I would benefit from further hearing testing. She referred me to Dr. Yuksel,” she says.

Sancak Yuksel, MD, associate professor in the Department of Otorhinolaryngology-Head and Neck Surgery at McGovern Medical School at UTHealth Houston, first saw Almazan when she was 46 and has seen her multiple times since then. “Her hearing gradually worsened and hearing aids didn’t help,” he says. “We suggested cochlear implants and she agreed to try one in her right ear in 2016.”

The result was positive. “My experience with my first implant was really awesome and much better than the hearing aids I was using,” she says. “When it was activated, I could hear my sons’ voices and understand what they were saying. It was a major breakthrough and a magical moment for me. I was so moved that I cried.”

In May 2021, Almazan, now 53, decided to proceed with a cochlear implant in her left ear. “A month after the operation, the device was activated. During my recovery, I was happy because I knew the clarity of my hearing would improve even more,” she says.

Stephanie Rios, AuD, a board-certified audiologist in the department, began working with her patient before the surgery. “It’s a long process,” Dr. Rios says. “Patients have to adapt to their device and commit to aural rehabilitation exercises to improve their speech understanding. She adapted faster to the second implant because she had been using the first for five years. With the second device, she has more sound awareness and can better locate sounds. She can now hear her sons talk in the next room. For a patient with profound hearing loss, that’s huge.”

“The first thing my sons do when they’re around me is check to see if I have my devices on,” Almazan says. “If I do, I can hear them say, ‘Be careful. She can hear us now.’”

Dr. Rios is working with her to update the external sound processor on her right ear, and Dr. Yuksel sees her periodically. “Mrs. Almazan is a great example of a person who qualified for bilateral cochlear implants and wanted to proceed despite her complicated medical history,” he says. “She’s still young and is happy that her significant hearing problem is resolved.”

“It’s awesome that they can apply this technology in a person who otherwise would be completely deaf,” Almazan says. “Before I had the implants, I had trouble understanding people over the phone. My devices are paired with my cell phone, which allows me to hear and understand much better. I’m very blessed to have access to this technology.”