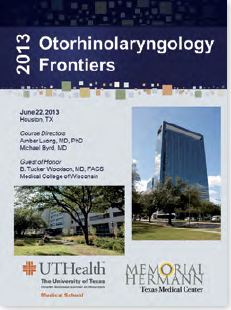 More than 75 physicians and other healthcare professionals attended Otorhinolaryngology Frontiers 2013, which highlighted research endeavors and emerging technology in the diagnosis and management of common otolaryngologic clinical problems. Held on June 22, 2013, at the Brown Foundation Institute of Molecular Medicine at The University of Texas Health Science Center at Houston and sponsored by the department of Otorhinolaryngology—Head and Neck Surgery at McGovern Medical School, the CME event featured guest speaker B. Tucker Woodson, MD, an internationally recognized expert in sleep disorders.

Dr. Woodson, who holds dual board certification in otolaryngology—head and neck surgery and sleep medicine, serves as medical director of the Froedtert Hospital/Medical College of Wisconsin Sleep Disorders Program. He has served on the Sleep Disorders, Standards of Practice, New Medical, Drug and Device and the National Sleep Medicine Course Committees of the American Academy of Otolaryngology—Head and Neck Surgery and the American Academy of Sleep Medicine. In addition, Dr. Woodson is an adviser for the American Sleep Apnea Association; ResMed, a world leader in respiratory equipment for sleep apnea; and professional football. He presented talks entitled “New Methods of Airway Evaluation in Sleep Apnea” and “Advancements in Palate Surgery for Sleep Apnea.”

ORL Frontiers is an annual event highlighting the research productivity of members of the department. This year’s course was extended to include additional lectures from the faculty. The following presentations were presented by the department’s faculty and residents: