In September, the AMA and McGovern Medical School are highlighting Women in Medicine. The McGovern Women in Emergency Medicine group will continue this celebration by highlighting 5 of the women doing amazing things in our department. 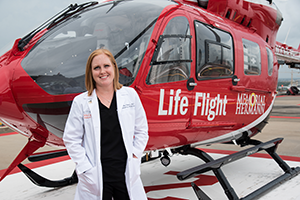 Dr. Lesley Osborn carries many more titles than MD. You could address her as Director, Deputy, Captain or Doctor and they would all be correct. No matter which title you use, Dr. Osborn is the epitome of leadership. Her personal motto could easily be that of the squadron she will soon deploy with: “That Others May Live.” She most recently embodied this motto by volunteering for service with the Texas Emergency Medical Task Force to care for some of the first patients with COVID19 in the United States – those evacuated from the Diamond Princess cruise ship to San Antonio, Texas in February 2020.

Dr. Osborn attended medical school and completed her emergency medicine residency in South Carolina. While attending residency, Dr. Osborn was appointed Assistant Medical Director for the Richland County Sheriff’s Department Tactical EMS Team. Richland County is the second most populous county in the state of South Carolina and includes the state capital, Columbia. But just directing the tactical EMS team wasn’t enough – Dr. Osborn chose to lead from the front and was sworn in as a Reserve Sheriff’s Deputy after completing the Reserve Sheriff’s Deputy Academy.

Dr. Osborn’s leadership and expertise in EMS and prehospital care earned her the appointment of Medical Director of Memorial Hermann Life Flight in July, 2019. Dr. Osborn is the first woman and third individual to reach this position held first by Dr. “Red” Duke. In this role, Dr. Osborn commands 68 personnel and 6 helicopters covering a 150-mile radius and completing over 3,000 missions a year.

But even this degree of service to her community was not enough for Dr. Osborn. In 2018, Dr. Osborn commissioned into the Air National Guard at the rank of Captain. She then transferred to the Air Force Reserve to serve as Flight Surgeon for the 308th Rescue Squadron. This means that Dr. Osborn is the primary physician responsible for over 120 pararescue (PJ) members. For those not familiar, PJs are extreme – they are specially trained in combat search and rescue. These are advanced EMT’s that fly into combat zones to rescue downed servicemembers behind enemy lines. They have equal competency with an M9 rifle, a parachute, and a med kit.

The Department of Emergency Medicine is incredibly grateful and proud of Dr. Osborn’s tremendous achievements.

Dr. Osborn in the media:

Dr. Osborn awarded “Woman Who Inspires” among the “2020 Women Who Mean Business” by Houston Business Journal.
Dr. Osborn interviewed by Houston Channel 2 News on her appointment to Medical Director of Life Flight.