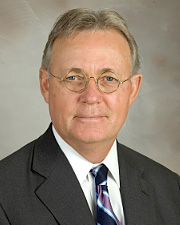 Arthur L. Day MD was born in Boston but raised in a small town in Louisiana. He graduated from Louisiana State University Medical School in New Orleans in 1972, and completed his neurological surgery residency training at the University of Florida (UF) in 1977.

Following a fellowship in brain tumor immunology, he joined the UF neurosurgery faculty in 1978, where he ultimately became a professor and the Eblen Eminent Scholar in Cerebrovascular Surgery; he also served as the Co-Chairman and Residency Program Director. While there, his clinical research interests centered principally on cerebrovascular diseases and sports medicine, while his basic research activities focused on cerebral ischemia and neural protection, particularly as affected by estrogens.

In 2002, Dr. Day moved to Boston where he was appointed a Professor of Surgery at Harvard Medical School and Associate Chairman and Residency Program Director of the Department of Neurological Surgery at the Brigham and Women’s Hospital (BWH).  He also served as an attending staff physician at BWH and a consulting physician at Children’s Hospital Boston. From 2007 – 2010, he was the Chairman of the Department of Neurosurgery of the Brigham and Women’s/Children’s Hospitals Boston.

In July 2010, he moved to Houston to assume his current position as Professor and Vice Chairman, and Program Director of the residency training program for the Department of Neurosurgery, University of Texas Medical School at Houston.  He is also the Director of Clinical Education at the Mischer Neuroscience Institute.

American Board of Neurological Surgery