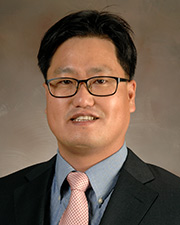 Dr. Lee obtained his Ph.D. from the Department of Biomedical Engineering at University of Cincinnati in 2009. His graduate school research focused on studying the assembly mechanism of the Phi29 DNA packaging motor, and nano-scale conversion into functional Nano medicinal device for cancer therapy as a member of NIH Nanomedicine Development Center. The series of studies had provided a fundamental idea of how to engineer viral components, especially viral pRNA and ATPase gp16, for future application into nanotechnology and nanomedicine. Before his Ph.D., Dr. Lee finished his degrees of B.S. and M.S. in Biology and Virology at Sogang University in South Korea in 1998 and 2000, respectively, then worked for LG Life Sciences Co. Ltd., the largest research-based pharmaceutical company in Korea, as a research scientist in the Division of Drug Development and Analysis, until 2004. He studied non-coding RNA and microRNA biology in human cancers during his postdoctoral training in Dr. Carlo M. Croce’s laboratory in the Comprehensive Cancer Center at the Ohio State University since 2010.

Dr. Lee has focused on basic and translational studies on a role of deregulated microRNAs in tumorigenesis and developing a strategy to treat brain tumors using cutting edge RNA-based nanoparticles. Brain tumors are the second-leading cause of cancer-related death with limited options of treatment. My research mainly involves novel nanoparticle based on pRNA derived from the DNA packaging motor of bacteriophage Phi29 for successful delivery of therapeutic microRNAs into brain tumors. I developed a new RNA nanoparticle loaded with various siRNA or microRNA by engineering pRNA from phi29, and further modified them to fit for tumor cell recognition, internalization and delivery of cargo RNA molecule. First batch of RNA nanoparticle has shown to successfully penetrate the blood brain barrier and deliver a cargo siRNA of Luciferase reporter gene in mice model system bearing intracranial tumor, provided a proof-of-concept for efficient delivery of therapeutic RNAs for the treatment of brain tumors. When the anti-miR-21 carrying RNA nanoparticles were systemically administered, growth of glioblastoma xenograft in mouse brain was significantly reduced through reactivation of multiple tumor suppressors released from suppression by the elevated miR-21. The series of work was published in peer-reviewed journals, Oncotarget, Methods in Molecular Biology and Molecular Therapy. I have also actively participated in several other studies that examined the role of oncogenic or tumor suppressive microRNAs in various type of human cancers, which were published in well-known peer-reviewed journals including Cancer Cell, Proceedings of the National Academy of Sciences (PNAS), Journal of Experimental Medicine, Clinical Cancer Research, and Oncotarget. Dr. Lee has a long-term goal in his research to make a visible impact on the development of reliable strategy for cancer therapy by reprograming deregulated microRNAs in cancer patients by designing novel and innovative RNA nanoparticles that can be applied to future human clinical trials.