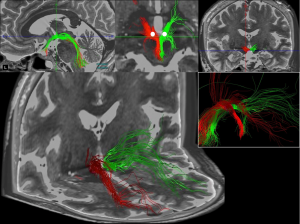 The Deep Brain Stimulation (DBS) surgery program led by Dr. Albert Fenoy focuses on delivering optimal treatment to patients suffering from movement disorders such as Parkinson’s disease, tremor, and dystonia, as well as refining treatments for patients with refractory psychiatric disease states, such as treatment resistant depression. In the majority of these surgeries, we record from the subcortical structures of the awake patient in an effort to better understand the disease process, refine the targeting, and together with new brain imaging techniques provide exemplar outcomes. Thus, the operating room is our chief laboratory space, to both learn from each patient and optimize treatment strategies.

Outside the operating room, the use of imaging to illustrate both the structural and functional connectivity of the networks involved in various pathophysiologies treated by deep brain stimulation can improve our understanding of the disease process and potentially lead to more strategic treatment paradigms.

Simultaneously with learning intraoperatively from human research subjects, animal models of disease enable us to understand the biochemical mediators of such pathological cortical states and how the intervention of deep brain stimulation improves aberrant subcortical firing to improve symptomatology. 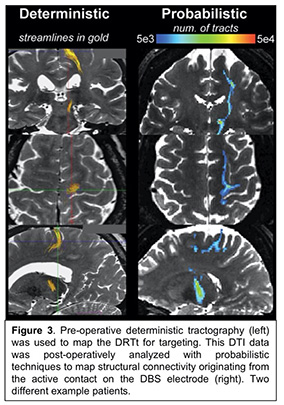 The symptoms of Essential Tremor (ET), the most common movement disorder in adults, are seriously disabling and are only marginally improved by medication alone. Tremor control has improved greatly with the use of deep brain stimulation (DBS) to the ventrointermediate nucleus (Vim) of the thalamus, a node along a circuit of abnormal rhythmic output in ET that travels from the cerebellar dentate nucleus to the contralateral red nucleus and cortex via the dentato-rubro-thalamic tract (DRTt).

Recent advances in diffusion imaging have led to the development of tractography techniques where the structural connectivity of fiber tracts such as the DRTt can be illustrated and then, as we have shown, directly targeted during DBS surgery for excellent clinical effect. Despite such novel targeting methodology and initial tremor improvement, however, the development of side effects such as progressive gait ataxia and waning efficacy after years of chronic stimulation points to the fact that the pathology of essential tremor is poorly understood.

Such incomplete knowledge of the network effects of chronic stimulation in ET is a major barrier that needs to be overcome through understanding the dysfunction and modulation of the connectivity of the cerebellar-thalamic-cortical (CTC) network over time.

Resting state functional MRI (rsfMRI) has emerged as a powerful tool to explore the functional connectivity between different brain regions and has improved the idea of ET as a network-based disease not confined to the motor circuit, including parietal visuomotor processing cortices; however, comparisons pre- and post- DBS have not been performed. 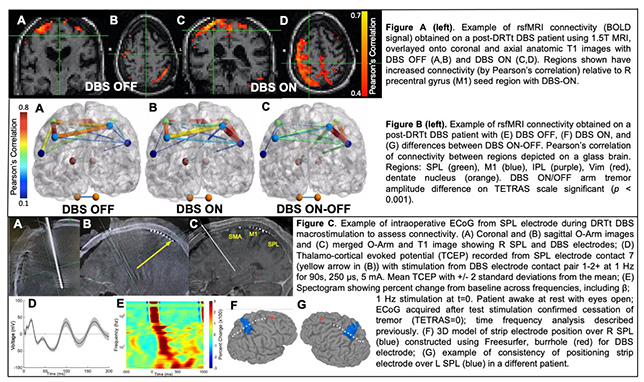 The use of positron emission tomography (PET) has correlated ataxic side effect with cerebellar metabolic changes after chronic DBS; however, associated changes seen with rsfMRI are unknown.  Our long-term goal is to understand how stimulation of the DRTt causes network-level effects over time. Our central hypothesis is that structural and functional connectivity of the DRTt correlates with clinical response to DBS in a time-dependent fashion. In pursuit of this hypothesis, we will recruit new ET patients already undergoing DBS and additionally perform imaging analysis to elucidate the effects of stimulation and define DRTt connectivity.  First, we will seek to define the structural connectivity of the DRTt by using tractography methods and compare over time diffusivity changes correlated with clinical response and/or ataxic side effect. Second, we seek to detect functional network changes due to DBS by using rsfMRI obtained serially in ON/OFF states, where we will track the evolution of altered connectivity changes over time. Third, we seek to confirm the cortical mediators of tremor identified by tractography and rsfMRI through the use of intraoperative electrocorticography during DBS. This innovative combination of using a novel targeting technique and serial imaging across DBS states will advance our understanding of the larger network response to DBS, which is essential to develop more specific stimulation of fibers to improve response and avoid side effects in ET.

Performed in conjunction with the UT Center of Excellence on Mood Disorders, led by chairman Jair C. Soares, MD, PhD,  this is an FDA-approved clinical trial for patients suffering from treatment resistant depression. This study is aimed to determine feasibility, safety and efficacy of DBS applied to the supero-lateral branch of the medial forebrain bundle (slMFB). UT is the only site in the US to perform such surgery at this target, and the second in the world.

Deep Brain Stimulation for Treatment Resistant Depression: Animal models
Performed in collaboration with the UT Translational Psychiatry Program at the Behavioral and Biomedical Sciences Building (BBSB), led by Joao Quevedo, MD, PhD., this project aims to evaluate the mechanisms by which MFB DBS improves depression. In the rodent, once a depression model is created using chronic unpredictable stress, MFB DBS is applied to observe behavioral improvement. Afterward, histological analysis is performed on subcortical/cortical structures investigating the involvement or modulation of the dopamine-reward pathway, which is hypothesized to be a key factor in how MFB DBS can incur a reversal of anhedonia.

Diffusion Tensor Brain Imaging in Deep Brain Stimulation
Many of the disease states treated by DBS involve placement of an electrode into to an anatomical area of the brain that has historically been seen to be part of a neuronal circuit subserving some function, such as the motor system. These anatomical nodes within this network are visible on standard imaging, but the circuits connecting them are not. Use of diffusion tensor imaging to identify tracts linking subcortical/cortical structures has elucidated novel and more refined targeting protocols for certain disease states, such as tremor. Evolution of imaging acquisitioning, stereotactic analysis and targeting schemes is underway to optimize outcomes. 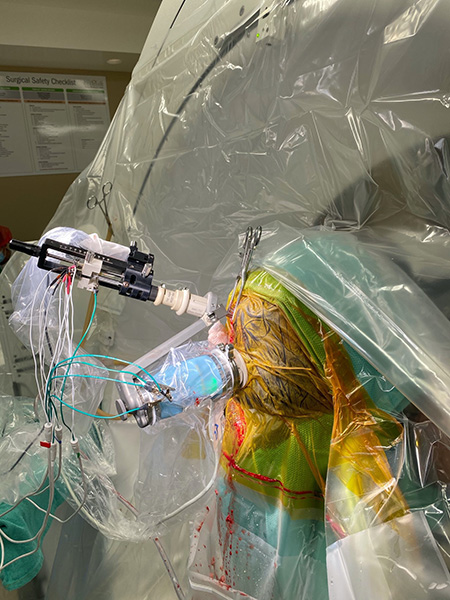