What is an inverted papilloma?

An inverted papilloma is a subtype of Schneiderian papilloma that occurs in the mucosal lining of the nasal cavity and paranasal sinuses.   In general, papillomas are benign epithelial tumors that sometimes appear similar to a nasal polyp. However, inverted papillomas  can disrupt adjacent boney and rarely can transform into  a malignant cancer.  The rate malignant conversion to be as high as 10-15%.  The tumors usually occur on one side, although inflammatory changes on the opposite are not uncommon.

Common symptoms of inverted papilloma include

How is it diagnosed?

An ENT or sinus surgeon can look into your nose with a small telescope. Because inverted papilloma have characteristic appearance, often the diagnosis may made through appearance alone. Since an inverted papilloma can mimic a nasal polyp in appearance, a biopsy may be necessary to confirm the diagnosis. In addition, a CT (or maybe a MRI) is usually ordered to determine the extent of the tumor and its attachment site. 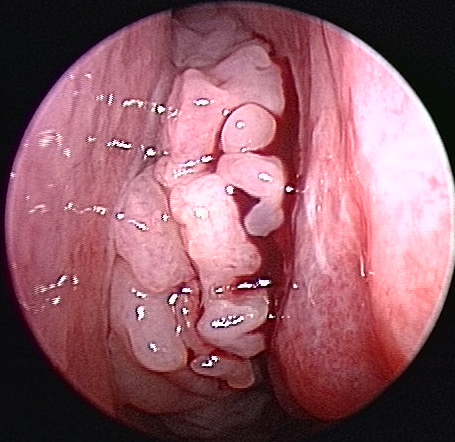 How is it treated?

An inverted papilloma is surgically treated through an open or endoscopic approach. At Texas Sinus Institute, our fellowship-trained rhinology surgeons perform an endoscopic minimally invasive approach, in which the procedure is performed through the nostrils. After evaluating the CT and MRI scans, the surgeon can localize the tumor site. A complete resection is paramount due to the increased risk of recurrence and malignant transformation.

The surgery is a day procedure with similar recovery to an Endoscopic Sinus Surgery (ESS).

What happens after treatment?

Following tumor resection, there are is a chance for tumor recurrence due to the aggressive nature of this benign tumor. Therefore, periodic endoscopic examinations are important for monitoring. If there are suspicious lesions, a repeat biopsy may be obtained and another surgery may be warranted.