After suffering for years from severe allergic fungal rhinosinusitis, Wynard De’kavon Crawford found relief through a minimally invasive office procedure: the placement of a tiny PROPEL® mini dissolvable implant into each of his ethmoid sinuses. Physicians at Memorial Hermann-Texas Medical Center and the John P. and Kathrine G. McGovern Medical School in Houston are among the first in the country offering the treatment in the office for chronic rhinosinusitis patients.

“Wynard presented with one of the most severe cases of allergic fungal rhinosinusitis we’d ever seen,” says Martin J. Citardi, MD, FACS, professor and chair of the Department of Otorhinolaryngology-Head and Neck Surgery at the McGovern Medical School at UTHealth, who has been treating Crawford since his first flare-up in 2008. “He’s done reasonably well, but he has required multiple procedures and long courses of oral prednisone to control the inflammation that characterizes this disease.”

Allergic fungal rhinosinusitis (AFRS) is a specific type of chronic rhinosinusitis. Features of AFRS include a unique thick and tenacious mucus with the consistency of rubber cement. This material, as well as sinus polyps, fill the paranasal sinuses, gradually expanding and distorting them. Patients with AFRS describe long-standing congestion, nasal obstruction and foul discharge, among other symptoms. Treatments typically include surgery and long courses of oral and topical steroids. 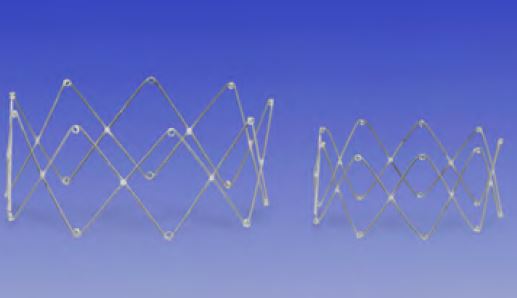 PROPEL (left) and PROPEL mini (right) may be
placed into the open ethmoid cavity after surgery.
Each device delivers mometasone (a topical
steroid) to the inflamed tissue as the device
slowly fragments.

Dr. Citardi placed a PROPEL mini implant in each of Crawford’s ethmoid sinuses after a flare-up in early 2015. “The effects were almost miraculous,” says Crawford, a senior at Texas State University who graduated in May 2016. “I went from a really bad condition to absolutely no problems.”

After placement of the steroid-releasing implant, Crawford’s requirement for oral prednisone was dramatically reduced. “In the past, during an exacerbation we would have to prescribe as much as 30 to 50 milligrams of prednisone daily and then drop back to 10 milligrams to control inflammation,” Dr. Citardi says. “Placing the PROPEL on both sides has allowed us to reduce the dose to 2.5 milligrams every other day, eliminating the need for higher doses of prednisone.” Within a few weeks, Crawford did not require any systemic prednisone for control of AFRS.

Crawford first began having problems during his freshman year in high school. When his family physician discovered nasal polyps, he referred him to an ENT in Katy, Texas, who referred him on to Dr. Citardi in the Texas Medical Center for surgery. Dr. Citardi performed revision image-guided functional endoscopic sinus surgery on his right side in 2009. At that surgery, the diagnosis of AFRS was confirmed. Postoperatively, Crawford had a significant reduction in symptoms but required serial endoscopic debridement as well as oral prednisone for maximal symptom relief. Approximately two years later, he developed AFRS on the left side, again requiring surgery. His postoperative regimen included serial endoscopic debridement, oral prednisone and culture-directed antibiotics, which together provided control. Despite the dramatic improvement, Crawford experienced periodic exacerbations that required escalation of treatment.

“Sometimes Wynard would be doing great, then things would flare back up,” says his father Wynard Crawford Sr., who has been actively involved in his son’s care. “Implanting the PROPEL was a piece of cake. The procedure took only a few minutes.”

The PROPEL mini is a smaller version of the PROPEL steroid-releasing implant, the first of a new type of product offering localized, controlled delivery of steroid directly to the sinus tissue. The spring-like implant expands to prop open the ethmoid sinus and gradually delivers mometasone furoate with anti-inflammatory properties directly to the sinus lining as the implant dissolves. The low profile of the curved delivery system, which has a diameter of 4.0 millimeters, ensures precise and easy placement, even in an office setting.

“Our goal has been to control the mucosal inflammation,” Dr. Citardi says. “The Propel mini has allowed us to do that while reducing our reliance on systemic steroids, which carry numerous long-term and short-term risks.”