Many of us have a touch of “sinus” from time to time. But for Sandra Butcher, a sinus problem turned into a miserable bout of chronic rhinosinusitis. After two-and-a-half years of discomfort, medication and doctor visits, Butcher’s story ended happily with the help of otorhinolaryngologist Martin J. Citardi, MD, FACS, chief of otorhinolaryngology—head and neck surgery at Memorial Hermann-Texas Medical Center and professor and chair of the department of Otorhinolaryngology—Head and Neck Surgery at McGovern Medical School.

Butcher, her husband Larry and their three daughters moved from California to Corpus Christi in 1979, when Larry took a job in the oilfields. Aside from the occasional head cold, Butcher, 68, who works at a Ford dealership, had always enjoyed good health—and playing sports. 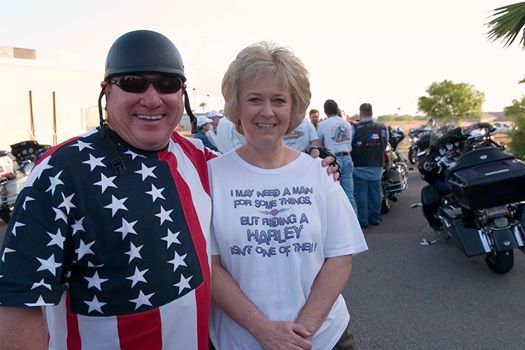 Sandra Butcher and her husband, Larry

“I like to do it all – baseball, basketball, kickball, snowmobiling, golf, aerobics,” Butcher says. The couple also enjoys dirt-track racing. And Butcher is a power lifter: Eight years ago, she set a record for bench-pressing 137 pounds. She kept going strong well into her 60s—until 2009, when she went to her doctor with what felt like a cold.

“I kept having that tickle in the back of my throat, and I’d cough and cough,” Butcher recalls. “I was very, very congested.”

As her symptoms progressed, two rounds of antibiotics to knock out a potential bacterial infection didn’t help. Neither did decongestants. Butcher began to have trouble hearing. She even suffered asthma flare-ups that frightened her husband and sent her to the emergency room.

Butcher began visiting an allergist for daily shots. She and her husband bought new bedding to cut down on allergens, and they banished their beloved dogs, Zippy and Kinser, from the house.

“Did I snore? Just ask my husband!” Sandra says.

“We’ve got two bull mastiffs, and she outdid ‘em!” he adds.

Increasingly desperate, Butcher visited a nearby ear, nose and throat specialist, who performed sinus surgery. But the surgery did not improve her symptoms. Another specialist offered contradictory advice about medications. In the meantime, she had nasal congestion and obstruction, causing her to breathe through her mouth, and she felt tired all the time. She gave up active lifestyle.

“I was miserable,” Butcher recalls. “At night, I slept propped up. On weekends, I would sit in my chair and sleep—I couldn’t do anything. I just barely made it to work every day.”

Chronic rhinosinusitis (CRS) is an uncomfortable condition in which the lining of the nasal passages and the adjacent paranasal sinuses become inflamed and swollen for 12 weeks or more without responding to treatment. Normally, the sinuses and nasal passages produce a small amount of mucus that keeps them moist and catches dust, bacteria and other inhaled debris. The mucus drains to the back of the nose, where it is swallowed. If inflammation swells the sinuses, that drainage may be blocked, and the mucus collects and becomes infected.

If untreated, the condition leads to nasal congestion, making it difficult to breathe through the nose. Smell and taste can grow dull. Depending on which sinuses are involved, the face can become tender to the touch over the cheekbones or forehead. Some people suffer discomfort in the ears, bad breath, cough, fatigue, and even nausea. Constantly uncomfortable, people with CRS may find themselves unable to engage in their ordinary activities.

Although not usually life threatening, the condition can erode quality of life as badly as serious chronic diseases like diabetes and congestive heart failure. “It’s like having a bad head cold, every day, without end,” notes Dr. Citardi. “Also, these patients are constantly going back and forth to physicians, and being in that sick role magnifies the sense of not being well.”

Butcher can relate. “I thought, ‘Oh my God, am I going to have to live the rest of my life like this?’” she recalls. “I was really depressed.” Because her condition did not improve, Sandra’s ENT surgeon finally referred her to Dr. Citardi. In addition to being board certified in otorhinolaryngology, he is trained in the subspecialty of rhinology and is one of three rhinology subspecialists who are core members of UTHealth’s Texas Sinus Institute (www.texassinus.org).

“Most of our patients have had one or more previous surgeries,” Dr. Citardi says, “so we are often the last stop for someone like Sandra.” He examined Butcher’s sinuses with a nasal telescope and saw scarred pockets, inflamed sinus linings, polyps and abnormal secretions too thick to drain.

Based on his examination, his conversation with the Butchers, and a review of her medical record, Dr. Citardi concluded that she would benefit from a procedure called image-guided functional endoscopic sinus surgery (IG-FESS). This minimally invasive operation allows the surgeon to clean the sinuses, remove debris and open up blocked passages so that secretions can drain again. Because the work is done through the nostril, there is need for facial incisions. Often, the patient goes home on the same day.

“After we do the procedure,” Dr. Citardi says, “all the other medical treatments work better.”

As soon as she awoke from anesthesia, Butcher could tell the difference. “I felt so much better. It was like night and day,” she recalls. “I didn’t have that pressure on my chest anymore. I could breathe.”

Surgery for CRS isn’t a complete cure. But because operations like IG-FESS can fix the “plumbing” problem in the sinuses and nasal passages, it can make treatment for infection or inflammation far more effective. With follow-up medical treatments, including steroids and topical antibiotics, and careful attention to flare-ups, Butcher has done well.

“After the surgery and my next couple of visits, every time I saw Dr. Citardi, I’d just give him a big old hug because he changed my life. He really did,” Butcher says. She pauses. “I get emotional,” she adds.

Doctors don’t fully understand the causes of CRS. Years ago, they emphasized antibiotics because infection was thought to be the underlying problem. Today, they believe that CRS results from out-of-control inflammation in the sinus lining. Patients with CRS often have asthma, a disorder with similar inflammation in the lining of the lungs. Some patients with CRS are also allergic to inhaled materials, although most researchers think of these two conditions as separate processes that may occur together.

Some CRS patients also have nasal polyps. Allergic fungal rhinosinusitis (AFRS) is a special type of CRS with nasal polyps that includes an inflammatory reaction to common fungi.

Treatment starts with making sure the diagnosis is correct – and with not mistaking less serious conditions for CRS. “Most episodes of nasal symptoms are self-limiting and probably do not need much treatment,” Dr. Citardi notes.

For example, acute viral infections of the nasal lining (acute rhinitis, or a “cold”) are common, but they improve with simple supportive measures. About 2 to 5 percent of patients with acute rhinitis develop an acute bacterial sinus infection, which is best treated with oral antibiotics. Inhalant allergies, also known as allergic rhinitis (allergic inflammation of the nasal lining), respond well to treatment with oral and spray antihistamines and nasal steroid sprays.

CRS is different, with symptoms that include three or more months of nasal congestion, facial pressure and/or foul nasal discharge. The sense of smell may also be affected. Treatments include steroid sprays and pills as well as antibiotics. Flushing the sinuses with a saline solution can help.

If these medical treatments don’t work, then a patient with persistent CRS may be a candidate for sinus surgery. Functional endoscopic sinus surgery (FESS) was introduced 30 years ago, and since then numerous technological innovations have improved it. Many of these surgeries use computer-based image guidance, a technology that works as a GPS system to help guide the surgeon during the operation. Balloon sinuplasty is another tool that may be used during sinus surgery.

Some patients try complementary and alternative medicine treatments for CRS. Dr. Citardi advises caution, since many of those treatments are unstudied and potentially impure. And substituting unstudied treatments for more tried-and-true approaches can rob the patient of opportunities to get better.

“I have seen patients who spend thousands of dollars each month on alternative medicines, and then they come back worse than ever before,” Dr. Citardi says. He suggests that patients trying alternative treatments at least keep their doctors in the loop.

These days, Butcher feels great. She manages her sinuses with a bedtime nasal spray. She’s sleeping flat and has stopped snoring. Zippy and Kinser are allowed back in the house. And she’s active again: she’s doing aerobics and 5K races, and on weekends she helps her husband with his lawn service.

“She’ll outdo me, mowing and everything,” Larry Butcher says. “Oh, and kickball. This coming year, Sandra, her daughters and granddaughters are all on the same kickball team. They call themselves The Chicks. And they’re undefeated.”

Life, in other words, is back to normal. “If I can get out of the house,” Butcher says, “I will.”

“Breath of Fresh Air” originally appeared on May 14, 2014, in Health Leader, an online magazine produced by The University of Texas Health Science Center (UTHealth).