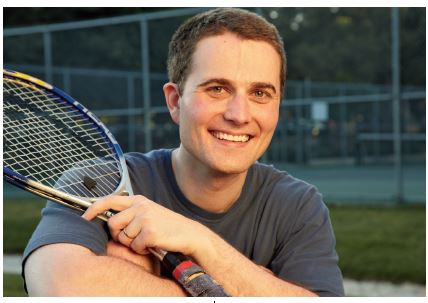 Toward the end of 2010 and well into 2011, 32-year-old Kurtis White had a persistent runny nose that he assumed was caused by allergies. After trying various over-the-counter medications for nearly six months—without relief—he made an appointment with his primary care physician. When the doctor found what looked a polyp and suggested he see an ENT, White made an appointment with an otolaryngologist who practices in White’s hometown of Austin, Texas.

“When I saw him, he said ‘You have something blocking your nose and it doesn’t appear to be a polyp. Let’s get you into surgery and find out what it is,’” White says. “I woke up feeling fine but when I saw him after the surgery, he told me he suspected it was a tumor. Instead of removing it, he did a biopsy.”

During his first postop visit a few days later, White learned during an office visit that he had esthesioneuroblastoma, an uncommon malignant tumor of the upper nasal cavity and anterior skull base. “Dr. Kahn told me it was something he didn’t have a lot of experience with, and that it was close to the brain. I asked him to write it down for me and later looked it up on the Internet—and discovered some frightening statistics.”

Esthesioneuroblastoma (ENB), also known as olfactory neuroblastoma, is an uncommon malignant tumor of the upper nasal cavity and anterior skull base. It is believed to arise from the olfactory neuroepithelium that lines the cribriform plate, superior aspect of the nasal septum, middle turbinate, and superior turbinate. The olfactory neuroepithelium contains specialized receptor cells that mediate the sense of smell. ENB was initially described by Berger and Luc in 1924, and is now thought to represent a few percent of all malignant nasal tumors. ENB occurs over a broad age range and has a bimodal age distribution in the second and fifth decade, with most patients in their fifties and sixties. It has a propensity to metastasize to neck lymph nodes, and much less commonly to distant areas in the body. There are no known specific causes or risk factors for developing this tumor. ENBs tend to grow slowly, with patient survival of 20 years, or rapidly with widespread metastasis and survival limited to a few months. Because many of the symptoms associated with ENB are similar to those of inflammatory disease and other benign conditions of the sinonasal cavity, there is often a delay in the diagnosis. The mean time from the onset of symptoms to diagnosis is between six to 12 months. As a result, many patients have an advanced stage by the time they are diagnosed.

His local otolaryngologist sent White to Houston for an additional consultation with Martin J. Citardi, MD, FACS, professor and chair of the Department of Otorhinolaryngology-Head and Neck Surgery at McGovern Medical School and chief of otorhinolaryngology at Memorial Hermann-Texas Medical Center. Dr. Citardi is a member of Texas Skull Base Physicians (www.texasskullbase.org), a multi-specialty program with expertise in the diagnosis and management of skull base tumors and lesions.

White recalls how grateful he was that his ENT in Austin paved the way for him. “I was able to see Dr. Citardi as soon as he returned from vacation, and Dr. Citardi had all of the information from the biopsy and my care in Houston.”

White was examined and evaluated by Dr. Citardi, who ordered an MRI. “We already had a diagnosis of esthesioblastoma, and the pattern on the MRI was consistent with the diagnosis,” Dr. Citardi says. “The first thing we do in cases like this is define the extent of the lesion. Patients with a large intracranial component are usually treated with chemotherapy and radiation therapy up front, before surgery. Kurtis’s tumor—although it was large and bulky– was more limited and located entirely within the sinuses.”

Dr. Citardi had prearranged a meeting of the hospital’s multidisciplinary tumor board the following day. After review and discussion of the case, the physicians—from the specialties of medical oncology, radiation oncology and neuroradiology—agreed that the tumor could be treated surgically.

The traditional surgical approach to ENB, favored by many institutions and authors, is craniofacial resection. “A neurosurgeon does a frontal craniotomy to allow approach to the sinuses from above, and the ENT surgeon does a lateral rhinotomy or midfacial degloving to approach the sinuses from below,” Dr. Citardi says. “But for the past few years, we’ve been removing most tumors and any involved structures effectively using an endoscope through the nose.”

From the patient’s standpoint, there’s a dramatic difference between the traditional approach and the endoscopic approach. Hospitalization for endoscopic transnasal resection is a fraction of the length of stay for the open procedure, and patients avoid the difficult recovery associated with craniotomy. Cumulative experiences across institutions confirm that tumor control rates are comparable between the ‘open’ and the minimally invasive approaches.

White was scheduled for surgery quickly. He knew the procedure carried some risk. “We’re working through an endoscope inserted through the nostril and disassembling the sinuses,” Dr. Citardi says. “By definition, we are near the eye, and other critical structures. During his surgery, we sampled the dura, which was fortunately clear of cancer. At the end of surgery, we had to repair defect of the skull base.” White was hospitalized for three days, rested at home for a week and returned to work a few days later. In less than 3 weeks from his surgery, he began coursework for a Master’s of Business Administration at Texas State University’s Round Rock campus.

Dr. Citardi points out that although the strategy employed for this patient is minimally invasive, endoscopic surgery, it is not regular sinus surgery and it carries the risks and complexities of open skull base surgery. “To achieve our objectives, we need to perform a radical disassembly of the sinuses working through a nostril. From a technical standpoint, the procedure encompasses almost all of the endoscopic techniques developed over the past 25 years.”

Among the advantages of the minimally invasive, endoscopic approach is the rapid recovery. “White’s postop recovery really is not that unusual. And, we can give patients this speedy recovery without compromising the extent of surgery,” Dr. Citardi observes. “Kurtis healed very well,” Dr. Citardi says. “We had negative margins on the final pathology, and he didn’t have to undergo radiation. From the physician standpoint, his recovery was unremarkable, which is the outcome we’re after. His local ENT had given us a lot of information up front and done a good job of getting things started so that the handoff to us was smooth. We scheduled the office appointment and MRI, lined up the tumor board, and when Kurtis came in Everything was in the right place at the right time.”

“I know this sounds strange when you’re dealing with cancer, but it was a wonderful experience,” White says. “Given that I learned I had a rare form of cancer, and in light of all that could have happened, I was surprised at how smoothly everything went. I was happy to learn that I wouldn’t need chemotherapy and radiation. It was downright miraculous, in fact. I’m grateful to my ENT here in Austin for the referral to Dr. Citardi, who walked us through all the steps and got things moving quickly. If you have to go through an experience like this, this is the way to do it.”