As she was preparing to leave for a semester abroad in Europe, 20-year-old Baylor University student Bridgette Marshall heard news she never expected to hear. Her otorhinolaryngologist Martin J. Citardi, MD, FACS, told her she had a very rare and advanced form of cancer. “Sinonasal undifferentiated carcinoma is what they called it,” Marshall says. “If they hadn’t found it when they did, I would have been alive only a few more weeks.” She canceled her trip to The Netherlands, and put school and her life on hold.

Marshall’s CT and MR scans showed a very large mass that filled her entire nasal cavity and most of her paranasal sinuses with erosion into both orbits. In addition, the mass had a large intracranial extension with brain swelling and brain shift.

“We took her to the OR for biopsy,” says Martin J. Citardi, MD, FACS, who is professor and chair of the Department of Otorhinolaryngology-Head and Neck Surgery at McGovern Medical School and chief of otorhinolaryngology at Memorial Hermann-Texas Medical Center (MH-TMC). “When the pathology report came back with a diagnosis of sinonasal undifferentiated carcinoma (SNUC), we knew right away that we wanted morphoproteomics. SNUC is an aggressive cancer, and the prognosis is poor. We wanted to bring everything we had to the table.” 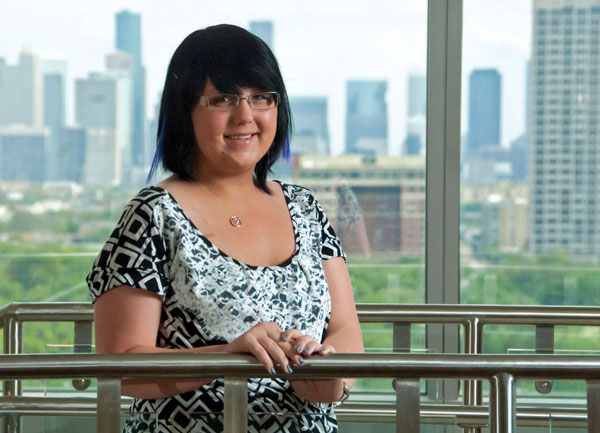 The traditional treatment for SNUC based on 30 years of medical literature is radical open surgery, chemotherapy and radiation therapy. Dr Citardi and his colleagues “are always looking for a less invasive approach. From a surgical standpoint, he has shifted his rhinology practice for tumors to a less aggressive endoscopic approach that disassembles the inside of the nose to remove the tumor,” says pathologist Robert Brown, MD, who holds the Harvey S. Rosenberg, MD Chair in Pathology and Laboratory Medicine at the McGovern Medical School. “But he’s looking for more than just removal of the tumor, because that may not provide a cure. He wants to understand the chemistry of what makes tumor cells grow and spread, and combine his techniques with what we’re doing in proteomics to target the tumor with very specific, personalized anticancer treatment.”

Dr. Brown’s Consultative Proteomics Service at the McGovern Medical School is based on a type of protein study called morphoproteomics, which involves a visual inspection of the proteins in malignant cells. Using a fluorescence microscope, he looks for changes in the cellular location and state of activation of the proteins, which can help the patient’s oncologist identify the most vulnerable parts of cancer cells.

“We’re trying to outsmart the cancer,” he says. “The first principle of pathology I learned in high school biology class was biological variation. No two individuals are alike, nor are they like their parents. That principle holds up for all types of cancer. The disease always has a variation that, in some ways, is unique to the patient. As pathologists we now have the tools to define the biology of an individual tumor so that we have a better understanding of what’s driving it and how we can interrupt the pathways in a way that’s customized to the patient. Instead of lumping patients into a category and treating them according to standardized protocols, morphoproteomics treats them as individuals. We can identify what therapies will best target the pathways of the tumor and create novel treatments in collaboration with our clinical colleagues.”

Morphoproteomics requires the team efforts of pathology, medical oncology, surgical oncology and radiation oncology. “We discuss cases at our head-and-neck tumor board at least once a month,” Dr. Brown says. “We share our ideas one with the other and come up with a rational therapy based on an intellectual exchange of different viewpoints.”

When the tumor board reviewed Bridgette Marshall’s case, the consensus was to select chemotherapy based on morphoproteomics, add a standard course of radiation therapy and repeat the imaging studies when the treatment was finished.

Based on her personal biology, she received 3 cycles of cisplatin, etoposide and doxorubicin, traditional cytotoxic agents, selected by the tumor profile created through morphoproteomics. In addition, the morphoproteomics profile suggested the presence of biochemical pathways whose activity of metformin (an oral anti-diabetes drug used primarily to treat type 2 diabetes) and melatonin (a hormone that regulates circadian rhythms). The addition of these oral agents was based solely on the morphoproteomics. The incremental cost and risks associated with long-term oral administration of both agents was deemed small compared to the potential benefit of enhancing tumor control.

“We were all amazed!” Marshall says. “When I was first diagnosed, I was in denial and refused to believe that there was something so deadly inside of me. After my first long stay in the hospital for treatment, I started coming to terms with my disease and wanted to learn more. A little research showed me that patients diagnosed with SNUC have only a little over a 60 percent two-year survival rate. I was terrified. And then my tumor was gone after two treatments.”

Dr. Citardi was also concerned about residual tumor in Marshall’s sinonasal cavity, and he proposed a “second look” procedure to Marshall, who agreed with this surgical intervention. During that procedure, completed 3 months after the end of chemotherapy, Dr. Citardi performed formal endoscopic sinus surgery, with care to assess those regions where the likelihood of residual tumor was greatest. Fortunately, no tumor was seen on either side. Within a few days, she developed watery rhinorrhea that was suspicious for a CSF leak after an episode of vomiting. Marshall was then admitted for a lumbar drain with resolution of the drainage. Repeat endoscopy in the OR confirmed the absence of a visible skull base violation due to the previous surgery. One month later, she underwent stereotactic radiosurgery with the Leksell Gamma Knife® to treat remaining cystic lesion in her brain.

“It was scary, and it has been a long journey,” she says. “Seven months, four week-long hospital stays, two overnight stays, 13 scans, four surgeries, 35 radiation treatments, four emergency room visits, five outpatient chemotherapy treatments, two lumbar drains, more than 30 prescriptions, one Gamma Knife surgery, countless trips to Houston and here I am. Just seeing the morning sun seems to be a blessing. My cancer experience has brought me faith, helped me decide what I want to do with my life, shown me how much I’m loved, given me a drive to succeed more than before, brought me closer to my family and friends, and made me want to give back to the community that helped me so much. I’m a survivor.”

The benefits go beyond having fought cancer and won. “We’re not bombarding patients with redundant therapies that are toxic,” Dr. Brown says. “Morphoproteomics prevents unnecessary therapies, and the treatments we use tend to be lower dose. That adds to quality of life during and following treatment. Chemotherapy is expensive. If we can avoid giving patients a drug that costs, say, $65,000 a year and substitute it with agents that cost less than $1,000 a year, we’ve achieved a lot.”

Dr. Citardi believes that morphoproteomics holds promise. “It may be the wave of the future. We’re using it at our institution, and we hope to incorporate the tailored approach based on individual biology for cancer patients going forward, which will provide an additional avenue of treatment for patients who would otherwise fail standard therapies.

“These lesions are unusual in that location is as critical as the underlying pathology,” he adds. “Because each one is basically a custom build, we think the best approach is to come up with a customized treatment. If we can also avoid therapies that carry toxicity without great benefit—or limit their use—it’s a very good thing.”