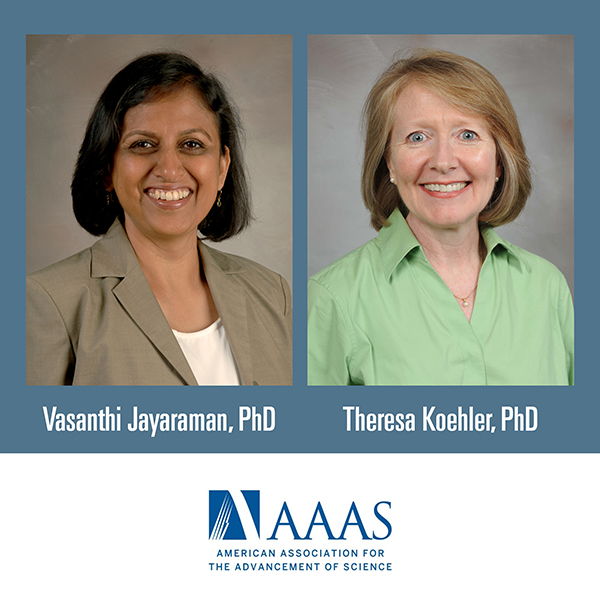 The American Association for the Advancement of Science (AAAS) has named Theresa Koehler, PhD, and Vasanthi Jayaraman, PhD, as part of their 2021 Class of AAAS Fellows.

AAAS Fellows are a distinguished cadre of scientists, engineers, and innovators, who have been recognized for their achievements across disciplines, from research, teaching, and technology; to administration in academia, industry, and government, to excellence in communicating and interpreting science to the public.

Koehler, the Herbert L. and Margaret W. DuPont Distinguished Professor in Biomedical Science, earned the honor for distinguished contributions to the field of bacterial genetics and physiology, particularly for gene regulation and host-pathogen signaling. Koehler’s lab focuses on Bacillus anthracis, a gram-positive, spore-forming bacterium which has the ability to cause anthrax in mammals, and its relatedness to Bacillus cereus and Bacillus thuringiensis, which are similar physiologically but produce vastly different diseases.

In the fall of 2021, Koehler was also named President of the Association of Medical School Microbiology and Immunology Chairs. She is also a Fellow of the American Academy of Microbiology and has chaired the NIH Review Group on Bacterial Pathogenesis.

Koehler joined the medical school as an assistant professor in 1991 following a postdoctoral fellowship at Harvard Medical School. She earned her PhD and MS degrees in Microbiology at the University of Massachusetts in 1987.

Jayaraman, professor in the Department of Biochemistry and Molecular Biology, earned the honor for fundamental contributions to structure-function relationships in transmembrane proteins and elegant insights into the dynamics of synoptically activated ion channels. Her lab is focused on gaining an understanding of agonist mediated  activation and desensitization of glutamate receptors by determining the structural changes in the protein induced by agonist binding.

Jayaraman is also the editor-in-chief for Biophysical Journal and recently earned a Maximizing Investigators Research Award R35 grant from the National Institutes of Health. Recently, Jayaraman served as the chair of the Keck Center Executive committee of the Gulf Coast Consortia.

Jayaraman received her PhD from Princeton University in 1995 before completing a postdoctoral fellowship at Cornell University in 1997. She joined the faculty at McGovern Medical School in 2002.

The honor of being elected a Fellow of AAAS began in 1874 and is acknowledged with a certificate and rosette. The awards are presented at the annual Fellows Forum in conjunction with the organization’s Annual Meeting. The 2022 meeting will take place in hybrid format Feb. 19 online and in Philadelphia.