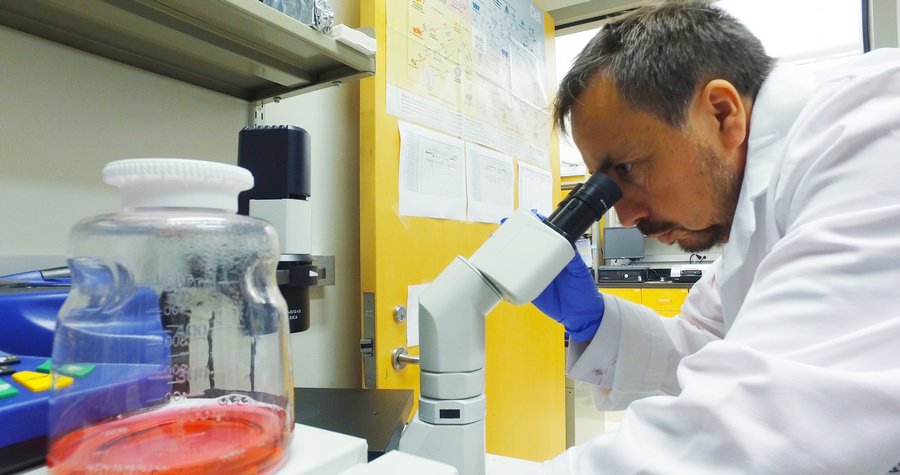 A five-year, $13 million grant to study how certain infectious agents evolve to spread chronic wasting disease (CWD) has been awarded to a UTHealth Houston research team led by Claudio Soto, PhD, from the National Institutes of Health (NIH).

Soto, principal investigator of the study and a professor in the Department of Neurology, has been receiving NIH funding for the project over the past 12 years in an effort to better understand prion diseases that can potentially spread to humans.

Prions are the protein-based infectious agents responsible for a group of diseases called transmissible spongiform encephalopathies, which includes mad cow disease in cattle, scrapie in sheep, variant Creutzfeldt-Jakob disease in humans, and CWD in deer, elk, and moose. All are fatal brain diseases with incubation periods that last years or even decades, resulting in the sponge-like degeneration of the brains of infected animals.

“The problem is that, even though the number of CWD cases is rising in the U.S., we don’t know if this disease can be transmitted to humans, like what happened with mad cow disease,” Soto said. “In other words, we don’t know whether these animal prions will produce a new human disease and how it will manifest.”

Since it was first discovered in Colorado in 1967, CWD has been identified in deer in 30 states, four Canadian provinces, and recently in northern Europe, according to the Centers for Disease Control and Prevention.

So far, CWD is the only prion disease of wild animals. It is highly contagious and the exact origin, prevalence, and mechanisms of transmission remain uncertain.

Therefore, with the latest round of funding, Soto’s team – which includes Glenn C. Telling, PhD, and Edward Hoover, DVM, PhD, of Colorado State University, and Jason C. Bartz, PhD, of Creighton University – will investigate the molecular and cellular mechanisms responsible for prion transmission and prion strain diversity in CWD. The researchers will study the generation, mutation, and evolution of CWD prion strains, the role of the environment on disease transmission, and the inter-species transmission potential of the disease, with a particular focus on its ability to spread from animals to humans.

“A lot of people eat venison, which may pose a risk,” Soto said. “Additionally, infected animals are putting these infectious agents into the environment.”

Through this research, Soto will continue to explore the possibility that prions accumulate in the environment in plants and other surfaces where they concentrate and remain infectious for years. Previous research from Soto’s team, which was also funded by the NIH, found that plants can uptake prions from contaminated soil and transport them to different parts of the plant, which can act as carriers of infectivity. This suggested that plants may play an important role in environmental prion contamination and the horizontal transmission of the disease.

Soto has been investigating prions for two decades. His invention of a method for highly efficient prion amplification and detection led to the first test to detect prions in human biological fluids. His group reported the presence of infectious prions in the urine and blood of patients with variant Creutzfeldt-Jakob disease in the New England Journal of Medicine and Science Translational Medicine. They were also able to detect prions in blood of naturally infected deer, even long before the animals showed signs of the disease.

The development and evaluation of a blood test for humans is supported by a grant from the National Institute of Neurological Disorders and Stroke and is under late stages of validation for regulatory approval in Europe and the United States. His new research is funded by Grant No. P01AI077774.