Couple travels almost 8,000 miles to save the life of their first child at McGovern Medical School
Skip

Couple travels almost 8,000 miles to save the life of their first child 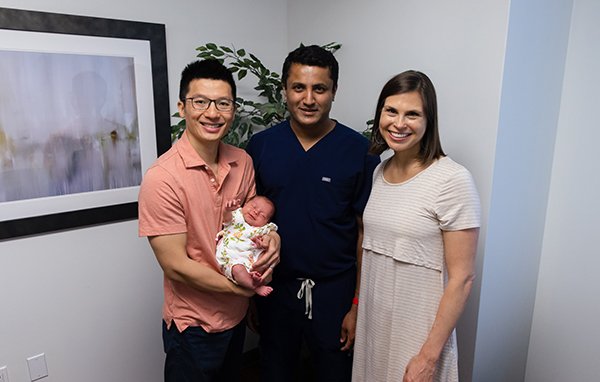 On Christmas Day, Anne and Mark made the 24-hour trip from Taiwan to Houston, and on Dec. 26, Ramesha Papanna, MD, performed a successful fetal surgery on Abigail Hope Cheng. (Photo by David Sotelo/UTHealth Houston)

Anne Briggs always longed to be a mom.

But after having no menstrual cycle for over a decade, she knew when she married her husband Mark in 2020 that conceiving a child naturally would be unlikely.

After a failed IVF transfer in March of 2021, Anne was thrilled to discover she was naturally pregnant in August of last year. But at her 20-week ultrasound, doctors in Taiwan, where she now lives, noticed an abnormal buildup of fluid around the baby’s lungs, known as pleural effusion. The fluid sometimes dissipates on its own, but in other cases, fetal intervention is needed to prevent complications and allow any chance of survival for the infant.

“Our entire world was rocked,” Anne said. “We were told our baby would not survive and were advised to terminate the pregnancy, but Mark and I knew that wasn’t an option.”

Through a mutual friend in her hometown of Dallas, Anne was put in contact with Ramesha Papanna, MD, MPH, a maternal-fetal medicine physician in the Department of Obstetrics, Gynecology, and Reproductive Sciences, and The Fetal Center at Children’s Memorial Hermann Hospital.

“When I was first introduced to Anne and Mark, my immediate goal was to try and put them in touch with an expert in the eastern hemisphere that could help them,” Papanna said.

Papanna spent the next few weeks staying up late to join virtual appointments with Anne and Mark and monitor the baby’s progress. But as time went on, the fluid never dissipated.

Doctors in Taiwan attempted several procedures to reduce the fluid, but when they were unsuccessful, Papanna knew he had to find a way to get the family to Houston.

“Unfortunately, they weren’t finding the care they needed and the interventions that providers in Taiwan offered were unsuccessful, and because of that, they were told to terminate the pregnancy. I knew that with our expertise in Houston and the right tools, the baby would have a 90% chance of survival. So, I told Anne, if you want to get to Houston, I will get the tools we need to do this surgery,” Papanna said.

To get those tools, he reached out to a friend, Greg Ryan, MD, head of the Ontario Fetal Centre in Toronto and Ryan overnighted the necessary shunt.

“Dr. Papanna did a virtual ultrasound on me when I was 24 weeks and he told us he thought the baby looked healthy enough to fly to Houston and we didn’t think twice about it. We were told to expect to stay a long period of time and so Mark and I went home, packed our bags, and booked the first flight we could. We knew this was the right choice for us,” Anne said.

On Christmas Day, Anne and Mark made the 24-hour trip from Taiwan to Houston, and on Dec. 26, Papanna performed fetal surgery to place a thoraco-amniotic shunt to help drain the fluid.

“This was not a major procedure. We went in while Anne was under local sedation and it took about three minutes to get into the chest cavity of the fetus to place the shunt. It was done quickly with no complications,” Papanna said.

“Once she was here, all our worries went away,” Anne said. “It was such a relief. She is here, she is happy and healthy, and all we could ever ask for. We are so incredibly thankful for Dr. Papanna and everything he did for us.”

During the process, Anne and Mark received loving support from family and friends and was deeply thankful to Papanna for saving their daughter. Instead of the usual gifts for a first baby, the couple asked for donations to be made to Papanna and his research lab at UTHealth Houston. They recently presented him with a check.

Anne, who never thought she would be a mom, celebrated her first Mother’s Day this month.