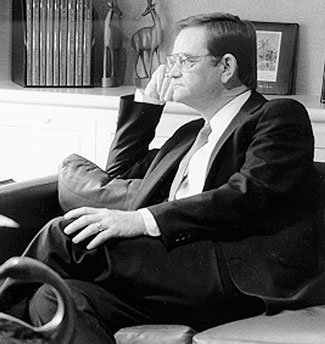 Webber joined the Medical School in 1974 as clinical associate professor of family medicine and was chair of the Department of Family Practice and Community Medicine from 1975 to 1984 and assistant dean for community affairs 1982–84. He also served as vice president for health affairs and senior executive associate to the president of the Health Science Center. He was the director of medical education for the Memorial Hospital System for a decade.

He received his medical degree from The University of Texas Medical Branch at Galveston. He completed an internship at the University of Mississippi Medical Center in Jackson and a residency in surgery there. He graduated from the School of Aerospace Medicine and was a flight surgeon with the XVIII Airborne Corps at Ft. Bragg, NC.

He died due to heart-related illness just 5 months into the dean role.

The green space between the Medical School and the Jesse Jones Library Building is dedicated in honor of C. Frank Webber —Webber Plaza.

There, inscribed on a granite plaque is a poem written in remembrance of Webber by former chair of the Department of Surgery, Dr. Frank Moody:

Thanks for listening
To our words
And directing them
To their purpose.
You were the best
To find a way
That all could share
And each could bear
The truth
In open conversation
Where the chips would fall
Without reproach
To reveal
The nature of the problem
And its solution
For the better of us all
But there is one word
Left unsaid
In our structured manly world,
We loved you.
Rest in peace,
Your work is done
And ours has just begun
To bid your will.
We commit our being
To pursue the course
You have set for us.
Farewell.