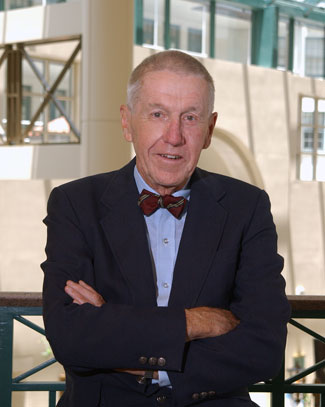 Dr. Cheves McCord Smythe skillfully guided the Medical School through its early years with his long-standing commitment to the fields of geriatrics and education and his exemplary standards of leadership.

Smythe was born and raised in Charleston, South Carolina, educated at Yale, and graduated from Harvard Medical School in 1947. He was trained in internal medicine at the Boston City Hospital and Bellevue and Presbyterian Hospitals in New York. Research fellowships in the study of hepatic and renal physiology followed. During the Korean War, he was assigned to the Naval Medical Field Research Laboratory, Camp Lejeune, in North Carolina, and was responsible for a variety of applied research ventures relative to military medicine. After 11 years on the faculty at the Medical College of South Carolina and three years as dean, he became associate director of the Association of American Medical Colleges.

He was then asked to organize The University of Texas Medical School at Houston in 1970 and has served on that faculty since, with three leaves of absence. He became dean and later professor of medicine and chair of the department of medicine at the Aga Khan University Faculty of Health Sciences in Karachi, Pakistan.

He was certified in both Internal Medicine and Geriatrics. In addition to his interest in medical school organization and management, he has been recognized as a devoted and appreciated teacher of clinical medicine. He retired from the Medical School in 2012, following 41 years of service.

An endowment has been established in Dr. Smythe’s name. Contributions may be made to:
Development Office, UTHealth
Cheves Smythe
PO Box 1321,
Houston, TX 77251-1321