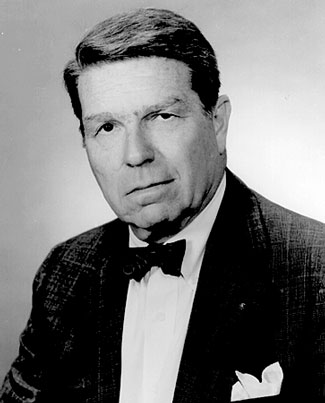 The Medical School’s third dean, Dr. Ernst Knobil was a giant in the field of neuroendocrinology. His research provided the basis for our understanding of the female reproductive function.

Born in Berlin, Germany, he moved with his parents to Paris in the 1930s, where he spent his childhood. In 1940, the family departed Europe for the United States on the USS Manhattan, the last ship to leave Genoa for Ellis Island prior to World War II. He served two years in the U.S. Army before completing his undergraduate degree in Animal Science and a Ph.D. in zoology (1951) at Cornell University.

As a student working in the laboratories of Dr. Samuel L. Leonard at Cornell and later, Dr. Roy O. Greep at Harvard, Knobil’s early research and teaching experiences set the stage for a lifetime of discovery and scholarship as an endocrinologist and systems biologist. In 1953, he received his first faculty appointment as an instructor at Harvard Medical School. There he was named a prestigious Markle Scholar and quickly rose through the ranks while teaching physiology to many of the leading academic leaders in medicine today.

From 1961 to 1981,  Knobil built the Department of Physiology at the University of Pittsburgh School of Medicine into an internationally recognized program as the first Richard Beatty Mellon Professor of Physiology and chair of the new department. He trained nearly 70 postdoctoral fellows and six graduate students, many of whom are today leading departments of physiology at universities and research facilities around the world. His students refer fondly to their training in the “Knobilab.”

In 1994, his fellows organized The Ernst Knobil Symposium at the University of Pittsburgh School of Medicine, requiring an entire weekend for colleagues around the world to summarize his impact on their training and careers. As the H. Wayne Hightower Professor of the Medical Sciences and director of the Laboratory for Neuroendocrinology at the Medical School, he was named an Ashbel Smith Professor by the UT System Board of Regents in 1989 for his lifetime contributions to academic medicine.

His research, spanning five decades, localized the pulse generator in the hypothalamus controlling the neuropeptide gonadotropin releasing hormone (GnRH) that serves as the basis for our understanding of the 28-day ovulatory menstrual cycle. This led to the successful treatment of women suffering with infertility of hypothalamic origin with over a 90 percent successful pregnancy rate.

His many research contributions also included an understanding of the species specificity of growth hormone, which led directly and for the first time to the successful treatment of human pituitary dwarfs.

From 1995–1999, Knobil chaired a national Committee on Hormonally Active Agents in the Environment for the National Research Council, to address increasing public concern about hormone-related toxicants in the environment.

UTHealth  has established an endowment in Knobil’s memory. Contributions can be made to The Ernst Knobil Endowment Fund, UTHealth Office of Development, P.O. Box 20036, Houston, TX 77025-0036.